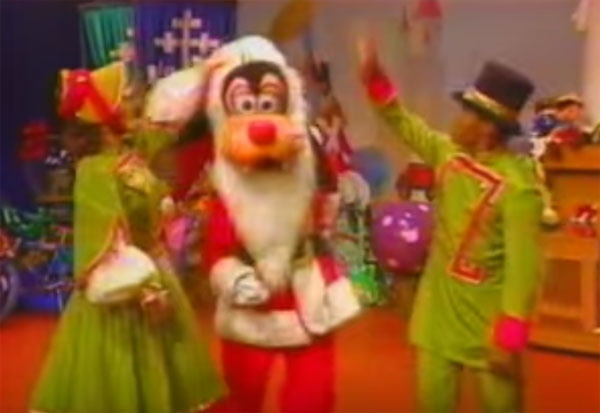 But what about those Disney Christmas Specials that didn’t really go over so well?

To spread a little bit of holiday cheer, I wanted to take a look at Four Forgotten Made for TV Disney Christmas Specials.

This first one originally aired on the Disney Channel in December of 1985 and wasn’t the biggest hit.

In this one, Mickey, Minnie, Donald and more have their hearts set on celebrating the holidays. Unfortunately for them, Scrooge McDuck is not full of the Christmas spirit and the gang spends the majority of the special trying to convince him that Christmas is a good time, including a visit to Santa’s workshop where the Seven Dwarfs are working as Santa’s elves.

There are lots of songs, strange horses that walk on only two legs, and a few reindeer that I just know are the same ones that WDW trots out for their Disney parades each year!

With the name of the special, however, I’d have placed some good money on the idea that there would be a lot of the Magic Kingdom on the show. It’s not even shown once! Instead it’s all (very 80’s) sets from a soundstage.

It’s no wonder why A Magic Kingdom Yuletide Special isn’t on our much-watch lists every year!

This one is an animated Christmas special that first aired during Disney’s Wonderful World of Color series on ABC in December of 1958. It was hosted by Jiminy Cricket, Mickey Mouse, and Tinkerbell and combined older Disney-produced Disney shorts with the latest shorts and clips from Disney’s most recently released films. Each segment would serve as a Christmas card (the first E-Cards, maybe?) from those characters to the viewers.

At the end of the special, the narrator would deliver a Christmas message to the viewer while a train filled with Disney characters, both famous and obscure, rolled by.

While the special has been shown pretty sporadically by Disney in the United States since the 1980’s, apparently it became HUGE in Sweden, Finland, Denmark and Norway over the decades. So huge, in fact, that it has been rebroadcast every year since 1958 and is considered one of their all-time holiday classics!

Oh, you can still find this on YouTube, or you can check eBay for the Laserdisc version that Disney put out in the late 1980’s. Now…how to find that Laserdisc player, that’s on you!

This 2001 Disney Channel movie stars Mr. Walter White and the Re-Gifter himself, Bryan Cranston. Mr. Cranston plays a pretty irresponsible 30-something named Nick Wrigley who is hacked by a couple of criminals who are looking to steal from Nick’s boss.

The criminals confront Nick who then takes off, steals a Santa Claus costume and then hides out with his nieces and nephews who all decide to turn to a life of crime of cooking meth-amphetamine in order to get rich. Okay, that last line isn’t true, it’s actually kind of what happens in Breaking Bad, but honestly it’s better than the real rest of the film, which is full of Santa having futuristic devices that both freeze time and shrink people.

Ultimately Santa uses a magical laptop to get everything fixed. Yes, this was a VERY early 2000’s type movie!

To remember this one, you’d have to go ALL the way back to 1932 (or do a quick search on YouTube!)

I had never seen it before watching it on YouTube so I’d suggest you go do that now before reading the rest so you don’t spoil it for yourself…I’ll be here when you get back!

So in this 7 minute short, Mickey Mouse and Pluto are sitting outside at Christmas and Mickey is playing Christmas carols on a bass looking for money. After making no money, he and his dog set up their musical camp outside a huge mansion.

An unpleasant child inside the mansion doesn’t want any of the gifts he’s getting for Christmas and tells his father that he wants the dog outside. Mickey doesn’t want to sell Pluto but after his bass is destroyed by a sleigh that’s passing by, he sees a poor family with a crying mother and learns that the father is in jail.

He returns to the mansion and tells the family that he will sell them Pluto if they will give him a good home. He takes the money that the rich family gives him and goes and buys toys and a Christmas dinner for the poor family, which he hands over while wearing a Santa suit.

Meanwhile, at the mansion, it’s not going well for Pluto. The family offers him everything a dog could ever want (including a roasted turkey tied to his tail) and Pluto just isn’t having any of it.

The father orders the butler to kick Pluto out and Pluto leaves and finds Mickey, who is sitting alone at a campfire with a “Snow Pluto” he’s made, and the short ends with Mickey and Pluto sharing the turkey for Christmas dinner.

Honestly, this one can’t be beat and even though it is kind of a cross between the Gift of the Magi and A Christmas Carol, it should still be more widely-known so every generation can experience it!

I first had the idea for this article while looking for specials to watch with my kids this week and I had a ton of fun watching these (or skimming through them in the case of the Bryan Cranston movie).

Christmas is all about spending time with those that you love so whether the Disney special is lousy or fantastic, I still think watching it with the family is time well-spent!

Do you watch Disney specials at Christmastime?