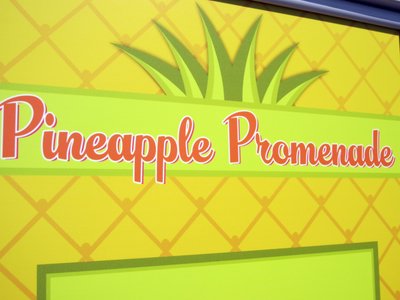 This year some components of the Food & Wine Festival are joining the Flower & Garden Festival, which runs from March 6, 2013 to May 19, 2013. The Flower & Garden festival itself features topiaries, flower gardens, a butterfly house, and – yes – now it also includes about a dozen “garden marketplaces” located around the World Showcase lagoon which offer food and drink. These mostly look like the food kiosks that come out each year for the Food & Wine Festival. So it is something of a repeat – but a delicious one.

In future articles we will look at some of the garden aspects of the festival, but for now let’s take a look at the food.

In the name of research, I visited four of (what I believe will be) the more popular stops and sampled some of the offerings. Let’s take a look.

Located near the main entrance way from Future World to World Showcase, the Pineapple Promenade sells – you guessed it – all things pineapple. The menu includes a pineapple upside down cake as well as a pineapple fruit cup. And like the Aloha Isle location in Adventureland in the Magic Kingdom, this kiosk sells the ever-popular Dole Whip – something like a soft serve pineapple ice cream. In addition to the Magic Kingdom version of the ice cream delight, Epcot sells a grown up version: Dole Whip with Siesta Key Spiced Rum. I tried it – my first experience of ice cream with liquor. It was delicious, and had just a bit of a kick. The rum was present but not overpowering.

Located near the United Kingdom pavilion, The Cottage sells a variety of items, described on the menu as “savories, trifles, and teas”. The signature item is a cheese biscuit with smoked salmon tartare and sour cream. It was extremely delicious. And I do mean “extremely”. Wow. Other offerings, which also sounded terrific, include baked goat’s brie with chutney, heirloom tomatoes with mozzarella, and a chocolate truffle.

Located near the France pavilion, L’Orangerie offers up some terrific French dishes. I tried the ratatouille with chevre. Did you know that ratatouille was originally a peasant dish? Well those were some lucky peasants, because it was wonderful. The kiosk also offers a country style pate and caramelized peaches.

Few things say America more than barbecue. Located near The American Adventure, this food kiosk offers a pulled pig slider with Cole slaw and a rocky road brownie mousse. At the recommendation of the Cast Member at the cash register, who said it was the best choice, I tried the smoked beef brisket. I’m glad I listened to him. The brisket came with collard greens and corn bread. All three food items were seriously delicious (I wasn’t so sure about the collard greens – I never had them before and I’m a little picky when it comes to veggies – but they were amazing). You can add your own barbecue sauce, selecting from sweet, hot, and spicy varieties.

At first I wasn’t so sure about how I felt about Disney adding food and drink components to the Flower and Garden festival. Sometimes I’m a purist. But after enjoying some of the food choice, I’ve got to say I’m a fan. And I learned that I like collard greens – so I feel like the garden tie-in is complete.

What do you think about the food additions to the Flower & Garden Festival?