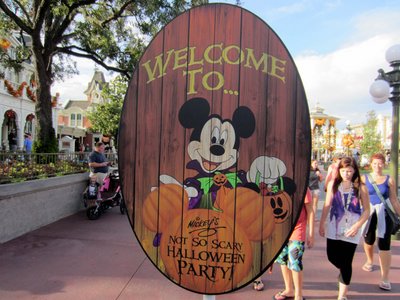 For many families, attending Mickey’s Not-So-Scary Halloween Party in the Magic Kingdom is a yearly tradition each fall. It is a lot of fun to dress up, collect candy, take in the special happenings that this hard-ticketed event has to offer, and enjoy the smaller crowds and shorter lines throughout the park.

Like so many things at Disney, following a few good tips can make your experience much better. Here are five simple ideas on how to make the most of your tickets to the Halloween Party.

Often times when you go to something at Disney makes the biggest difference on crowd levels and your ability to “get things done” (meaning have lots of fun taking in the rides and events). This is true for the Halloween Party. The earlier you go in the season, the smaller the crowds will be – and also the cheaper the ticket will be. Also, going on a weekday will ensure smaller crowds.

The parties typically run from 7pm – midnight, but Disney cast members will actually allow you into the park as early as 4pm. If you go early you can take in some rides before the party events begin. Typically the crowd levels at the Magic Kingdom are low on the days when Mickey’s Not-So-Scary Halloween Party takes place. Be sure to get your wrist band early, so that you will have access to everything that is going on.

One of the prime reasons for attending the party is trick-or-treating. Just look for the illuminated balloons and have your bag ready. Most of the candy stations have the same thing, but sometimes they will also offer something special that is unique to that location. Be sure to check out as many of the different candy distribution locations as possible.

Another highlight of the Halloween Party is the Boo To You parade. This is a parade you can only see during the Halloween party – unlike the Christmas Party parade which you can also see in the park during normal operating hours between Christmas and New Years. Typically the Halloween parade takes place twice each evening – at 8:15 and 10:30pm. Go get candy during the earlier showing, and then stake out a location on Main Street USA to watch the presentation of the Happy HalloWishes fireworks presentation (usually shown at 9:30pm) followed by the 10:30pm parade.

For those who have special dietary needs, Disney now offers a “treat swap”.  Stop by the Main Street USA City Hall and you can exchange your treats for those which are sugar-free or nut-free.