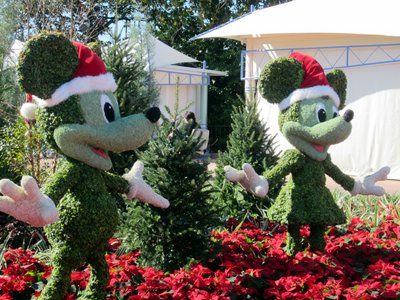 When you think of Christmas and Disney World, you probably think of the decorations on Main Street USA, or maybe the Castle Dream Lights. In effect, the Magic Kingdom probably comes to mind. But the Magic Kingdom isn’t the only park that decks the halls for Christmas. Epcot also gets dressed up for the holiday season too.

The Future World section of Epcot gets some holiday cheer with Disney character topiaries that are themed to Christmas. You will see Mickey Mouse, Minnie Mouse, Pulto, Goofy, and even Stitch carefully recreated out of greenery.

Several years ago Disney hosted the Brooklyn Tabernacle Choir at the Studios. While that show, which included a huge number of choir members, seems to have faded away, you can still get a taste of Christian Gospel singing with the live performance called Joyful! The show takes place on a stage in front of Spaceship Earth in Future World and features very talented singers performing songs in a variety of styles from gospel to Motown to hip hop. It’s great fun and I highly recommend it.

Somehow this often gets overlooked, but it is a real treat. The various countries around World Showcase share how they celebrate Christmas. For example, in Mexico you can hear the three kings (Los Tres Reyes Magos) tell the story of their journey. In France Pere Noel tells a story of Christmas through the eyes of a child. In the United Kingdom you can hear Father Christmas share traditions from Christmas past. And The American Adventure hosts Mr. and Mrs. Santa Claus as well as presentations on Hanukkah and Kwanzaa.

Perhaps the granddaddy for all Christmas events at Epcot is the Candlelight Processional. The event celebrates and retells the Christmas story through narration and song, and takes place at the American Gardens Theater. It is presented three times most evenings from the Friday after Thanksgiving to December 30. It features a 50 piece orchestra and a mass choir featuring Disney World Cast Members, high school choirs from around the country, and the professional singers from The Voices of Liberty – all under the direction of a professional Conductor. The event includes celebrity narrators that change every few days. In 2012 the narrators include Geena Davis, Gary Sinise, Neil Patrick Harris, Whoopi Goldberg, and Marlee Matlin. The event is extremely popular. If you decide to go, either book a dinner package or be sure to get in line very early or you may not be able to get in.

What do you think about Christmas at Epcot?