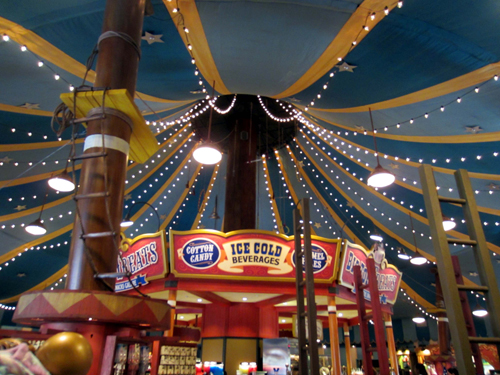 Five Reasons Not to Miss Storybook Circus at the Magic Kingdom

Here are five reasons not to miss Storybook Circus.

Dumbo the Flying Elephant, with its classic hub and spoke design, was an opening day attraction for Walt Disney World.  This attraction was a replica of the original Dumbo ride, which made its home in Disneyland. In 1993, the ride saw its first refurbishment, then it was moved to Storybook Circus in 2012 and refurbished again.

The original Dumbo ride featured ten Dumbos flying around Timothy the Mouse who held a whip and stood on a disco ball. The 1993 refurbishment removed the whip in favor a magic feather and the disco ball for a hot air balloon. When the ride moved to the new Fantasyland, a new, bright color scheme of red, blue, and gold, spinning lights, and sparkling fountains were added to fit the theme of the circus. The new, vibrant ride certainly attracts attention.

Before its relocation, the lines for this attraction were very long since it beckoned guests upon entering the park. When Disney announced the move, they said a second carousel would be added to accommodate the larger crowds that were expected. Because of this addition, lines are shorter as are wait times. Don’t let this fool you though; the enhanced energy makes this a favorite attraction.

Another great thing about this attraction is the queue, which Disney calls “next generation.” The Big Top playground allows kids and parents to entertain themselves until their letter is called to board their Dumbo.

If you love Dumbo during the day, try riding at night to really appreciate the bright lights. For an even more magical experience, ride during Wishes Nighttime Spectacular. You’ll get a unique vantage point of the fireworks as well as the park.

Big Top Souvenirs is directly across from Dumbo and is a large, airy circus tent with faux stitching on the floors, light strings across the ceiling, and circus car checkout areas. The vibrant signs show guests where to go, and the theming is really great to fit the area. Most of the souvenirs can also be found at the Main Street Emporium with the exception of a few circus-themed items.

Perhaps the best part of this tent, though, is the “Treats.” The large, circular counter in the center of the tent gives guests a great view of the Cast Members creating delectable desserts including caramel corn, candied and caramel apples, cotton candy, cake pops, fudge, and more! Be sure to pick up a snack, and don’t forget your Goofy’s Glacier slushy!

If characters are more your family’s speed, head over to Pete’s Silly Side Show to meet your favorite Disney characters as circus performers. The bright sign done in classic circus style beckons guests to come inside where you’ll meet the Great Goofini, Astounding Donaldo, Madame Daisy Fortuna, and Minnie Magnifique.

Though there is enough space to see all of the characters in this air-conditioned tent, you’ll have to wait in two separate lines to actually greet the characters. Minnie and Daisy are in one line, and Goofy and Donald are in another. However, the lines are usually short even during busy times.

Walt Disney World Railroad is full of Disney nostalgia. Walt himself loved trains and even built a train named the Carolwood-Pacific in his backyard on Carolwood Drive. There are four trains named after various influential people including Walt himself, his brother Roy, his wife Lilly, and Roger Broggie, the original Imagineer on the WDW Railroad project.

The 20-minute and 1.5 mile scenic tour aboard these authentic steam trains travels continuously throughout the day with stops at Main Street U.S.A, Frontierland, and the newest station in Fantasyland.

If the new Fantasyland is your destination of choice, or if you want to skip out on the crowds in the early morning, hop on the Walt Disney World Railroad, and ride it to the Fantasyland Station, which is meticulously decorated in blues and greens with brick, wood, and barn accents. You’ll also see circus-themed posters advertising the attractions. If you look above the station’s entrance, you’ll see a nod to Walt Disney in the “Carolwood Park” sign.

The Walt Disney World Railroad is a huge part of Disney history, and it’s nice to see that Disney incorporated this into the new Fantasyland.

There are two other attractions in the new Fantasyland that are more specifically for kids.

The Barnstormer is an exciting kiddie coaster on which riders see the Great Goofini crashing through posters, billboards, and other structures. Because the ride is visually appealing to young eyes and is quite exciting, the lines are usually quite long. Unfortunately, the cars are small and can’t comfortably accommodate a full-grown adult.

The Casey Jr. Splash ‘n’ Soak Station is also a hit with kids especially on hot summer days when they will indeed get soaked. Kids love it, but adults may not be willing to sacrifice their dry clothes for such little payoff.

Are you a fan of new Fantasyland’s Storybook Circus?