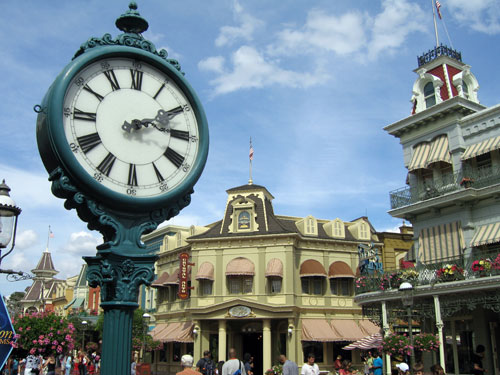 Sometimes you’ll have a day during your vacation that you really only have time to spend a half day in one of the parks.

Rather than spend that day in Hollywood Studios or Animal Kingdom, why not spend it in Walt Disney World’s most popular park: Magic Kingdom?

Sure, the other parks are great, but a half-day in Magic Kingdom – especially if you’ve already had a full day in the park – can be a great way to spend your day. If your flight (or car) arrived early in the morning or you aren’t planning to leave until later in the day, consider spending the remainder of the day in Magic Kingdom.

That said, here are five ideas for spending a half-day in MK!

If you’re planning to spend some extra time in Magic Kingdom, you might have fun being a tourist for a day. That means no attractions! I know: that seems preposterous! Just hear me out.

Visiting attractions wastes a lot of time because you have to wait in line. If you eliminate this time from your day, you’ll have a lot more time to explore the park. What’s more, sometimes people overlook some really great opportunities because they’re so focused on the rides.

The best place to do this is on Main Street USA. There are tons of shops like the Main Street Confectionery, the Emporium, The Chapeau, and Crystal Arts. You can get your haircut at The Harmony Barber Shop or eat at one of the many restaurants including Casey’s Corner (quick-service), and table-service restaurants Crystal Palace, Tony’s Town Square, and the Plaza Restaurant. The Plaza Ice Cream Parlor is also a popular place for a snack.

There are several shops and restaurants throughout the park, and each one is specifically themed for the land it’s in. The souvenirs, treats, and collectibles will also be themed for each land.

4. Go on a PhotoPass Photographer Hunt

If you’ve ever visited Disney World, chances are you’ve used the PhotoPass service at some point. If you’ve already purchased the MemoryMaker for your vacation, spending another half-day in Magic Kingdom devoted only to taking great photos is a fun way to spend a few hours. The more fun you have with the photos, the more fun the photographer will have. They can use props and position you in different ways to add special effects to your photos later on. These photos will appear on your MyDisneyExperience app and you can download them later. If you don’t have the MemoryMaker, you can purchase photos individually too.

The best part about the PhotoPass Photographer Hunt is that it’s a unique way to see the park. The MyDisneyExperience app will tell you where photographers are located, and you’ll pose in front of some of the most iconic scenes in the park, some of which you’ve either never seen or never looked at quite that way before.

3. Sorcerers of the Magic Kingdom

Sorcerers of the Magic Kingdom is a card game using hidden portals throughout the park to defeat the evil villains trying to take over. Some of these portals are in secret areas or areas that aren’t frequently visited by guests wandering around the park with the goal of visiting attractions.

This game allows you to move about the park with purpose and see things you might not otherwise see. Maybe you’ll even notice something completely new! This is especially fun for people who have been to the Kingdom several times.

If you want to play, visit the Firehouse at the entrance of the park on Main Street USA. The game cards are free, and they’ll get you started in the game. There are several card packs though, so you won’t get all of the cards in one visit. These make great souvenirs partly because they’re free!

If you plan to do this, there are a couple things you should do first. Scheduling a FastPass+ is a good place to start. This is obviously a very popular character meet and greet, so you probably won’t want to wait in the stand-by line. I also suggest preparing some questions and comments. Nothing is more embarrassing than meeting the most famous Mouse and getting tongue-tied!

After you meet the Mouse himself, head down to the Plaza Ice Cream Parlor, grab a cone, and talk about the difference between your interactions with speaking and non-speaking characters. If you have kids in your party, this is definitely one you won’t want to miss!

Above all, realize that you’re in Disney World! Whether it’s your first day or last day, just enjoy being with your family and/or friends. You’re in the most magical place on earth, so don’t put too much pressure on yourselves to pack a lot into this day. Do whatever you want to do. Maybe it’s something you missed or something you really enjoyed that you want to do again. Regardless of your chosen activity, enjoy doing it together!

Have you ever spent a half day at the Magic Kingdom?  What did you do?