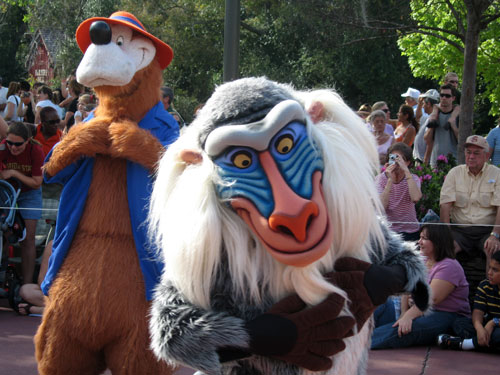 The incredible Cast Members at Walt Disney World do a great job of making magical memories for their guests. From simply wishing someone a happy birthday to bringing a free dessert to mark an anniversary, Cast Members are always on the lookout for ways to make a visit to Disney World just a little more special.

I’ve had chances to speak to a number of cast members over the years – both people I’ve bumped into in the Parks as well as friends. While I’ve heard that working at Walt Disney World isn’t a way to become rich, and the hours, crowds, and heat can be exhausting, nearly every Cast Member I’ve spoken to says they enjoy the experience because of the special memories they help create.

I thought about how making someone’s day special must be a great part of being a Cast Member. That also made me think about how I could do that myself even though I am not a Cast Member.

You too can help make someone else’s day at Walt Disney World just a little more special.

One extinct method of making another guest’s stay a bit more magical was by giving them an unused FastPass. Back in the old days when Disney handed out paper FastPass tickets, there were occasions when I received a FastPass ticket but didn’t use it. Whenever that happened, I made sure to give the FastPass to someone else. I can still remember one occasion a few years ago when I gave away FastPasses to the Rock N Roller Coaster. The recipient’s jaws dropped open in surprise and they were very thankful. I think I got as much enjoyment out of helping them as they got out of receiving a free FastPass.

While paying it forward with paper FastPasses is no longer an option now that Disney World has moved to paperless reservations, there are still many ways to help make someone else’s day.

Let’s look at five simple and fun ways you can help make magic for your fellow Disney World guests:

If you are reading this article, chances are that you know a bit more than the average guest about the layout of Walt Disney World. For those of us who are fans, it is easy to forget that Walt Disney World is a big and sometimes confusing place. I am sure you have seen people standing around Disney World, intently studying their Guide Map, trying to figure out how to get from where they are to where they want to be. Take a moment to ask if you can help someone with directions. You might be surprised at how often they take you up on the offer, and how thankful they are for a few moments of your time that can help get them pointed in the right direction.

2 – Help Someone Carry Their Food

Disney quick service restaurants can be crowded and noisy. The confusion can be unnerving even to those of us who are used to it. Have you ever seen a situation where a mom or dad has a huge tray of food and is trying to navigate their way through the crowd to get back to their family who is waiting at a table? I’ve seen it many times. Offer to help a person carry some of the items from their tray back to their table. They will likely be relieved and appreciate the help.

These days, it seems that more and more people are using Disney’s PhotoPass service. A professional Disney photographer takes their pictures so that everyone in the group can be a part of the shot. However, many people still take their own photographs. That usually means someone is left out of the picture because they’re the one taking the picture. You can see this nearly everywhere you go around Disney World. While you probably can’t make this offer to every group posing for a photograph, consider offering to take the picture for a group or two. I found that usually people will take you up on the offer and be very thankful for it. They might even return the favor!

4 – Wish Someone A Happy Birthday

The free “celebrate” buttons the Disney passes out are a great clue for Cast Members to do something special to people who are celebrating. Whether it’s a graduation, birthday, or anniversary, these buttons can let not only Cast Members know someone is celebrating, but they can clue you in as well. When you see a fellow guest wearing one of these buttons, take a moment to wish them a happy birthday or happy anniversary. I’ve done this many times and it has always been well received. It brightens their day and mine as well.

Okay, this one doesn’t precisely fit the title of the article, but it’s pretty close. Disney Cast Members go above and beyond to make everyone else’s day special. You can encourage them and make their day special by thanking them or by registering a compliment about their service. This can be as simple as directly telling a cast member they did a nice job serving a meal or answering a question, or it could be a bit more involved by asking for a manager and providing positive feedback. You can also stop by the Guest Services office at the entrance to any park to register a formal complement about a Cast Member. If you decide to go to Guest Services, be sure to note the Cast Member’s name from their name tag as well as their work location. Disney carefully records these complements in the Cast Member’s employment record. The compliments become an important part of their job history and can factor into future promotions. By encouraging a Cast Member, you may just motivate them to create a bit more magic for other guests.

Perhaps better than any other organization in the world, Disney knows how to make people feel special. You can join in the fun too. The next time you visit Disney World, take a few moments out of your day to make someone else’s day just a bit brighter.

Has a fellow Disney World guest ever done anything to make your day more special?