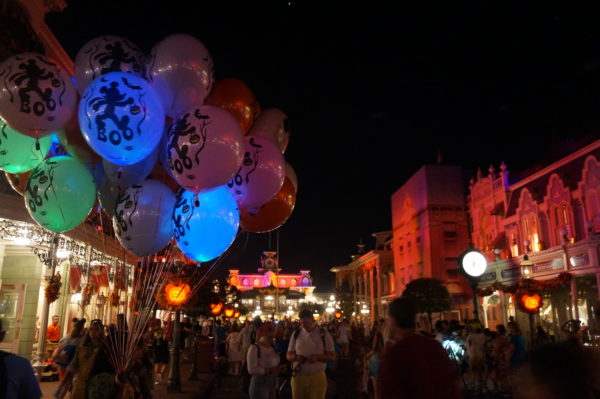 Five Fun Facts about Mickey’s Not So Scary Halloween Party

Mickey’s Not So Scary Halloween Party has now kicked off in Disney World’s Magic Kingdom. You might think you know Mickey’s Halloween party, but these five fun facts might surprise you!

Let’s take a look at some Halloween Party Trivia!

Mickey’s Not So Scary Halloween Party started on August 17th this year. That’s the earliest start ever in 24 years of operation! The party will run for 34 nights this year- more than ever before!

There are 176 individually themed and carve pumpkins on the balconies and windowsills of Main Street USA. These balconies are just outside of windows with names of significant contributors in Walt’s life and career contributing to the homey feel of the area!

The Boo To You parade is a Halloween Party exclusive show, and it takes a lot of help to make it happen! There are 175 performers, float drivers, costumers, cosmetologists, decorators, and maintenance Cast Members involved in the parade, which travels a total of 23 miles on the parade route throughout the season.

Disney World has Character Meet and Greets all year, but there are some characters who can only be seen at Mickey’s Not So Scary Halloween Party. Some exclusive characters include Dr. Facillier from The Princess and the Frog, Captain Barbosa from Pirates Of The Caribbean, Oogie Boogie from The Nightmare Before Christmas, and three hitchhiking ghosts from the Haunted Mansion.

Finally, there are literally tons of candy handed out every year during the party. That’s more than 250 tons of candy to be exact. That includes 40 different kinds of brand-name candies in 14 different treat locations around Magic Kingdom.