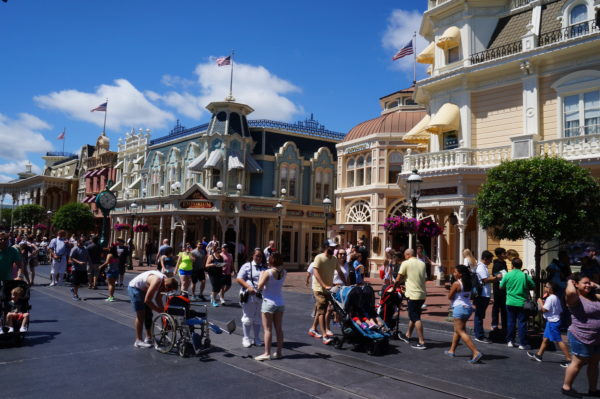 Five Favorite Activities to do Before Rope Drop

Getting up early may not be tops on your list of things to do on vacation, but if your vacation is in Disney World, you might want to rethink your plans. The parks are much less crowded early in the day, and as the hours roll on, crowds increase until mid-afternoon when crowds are at their peak.

So you might be wondering what exactly you can do that early in the morning. In fact, there’s a lot you can do before the park technically even opens. Two things I won’t discuss in this article guarantee you early entrance, but they will cost you: booking Advanced Dining Reservations for a Character Dining Experience and taking a Backstage Magic tour will get you into the park before anyone else, but be prepared to drop some serious Disney Dollars for this privilege.

Fortunately, there are several things you can do that are either free or very affordable, and that’s what we’re going to look at today!

Sure, you could drop a couple hundred dollars for a Character Dining Experience, but Disney has recently added Starbucks restaurants to every Disney World park, which is a much more reasonable option.

Each Starbucks has a full traditional menu, and there are even some special Disney items on the menu. Grab some coffee or tea and a giant cinnamon roll and get ready to take on the day!

The Starbucks get packed shortly after opening, so getting there early will limit your wait time and the likelihood that you’ll be able to get a seat at one of the outside tables.

There are several really neat shops on Main Street USA. The Emporium, on the left side as you’re walking in, is the largest gift and souvenir shop in Magic Kingdom. You’ll find apparel, plush, pins, themed candy, and much more. Main Street Confectionary is another favorite shopping destination; it’s reminiscent of an old-fashioned candy shop. They sell character-themed candy apples, rice krispie treats, and more, and you can even watch them making the items they sell. Even if you don’t buy anything, it’s really cool to watch the chefs at work! Other fun shops include Crystal Arts, Disney Clothiers, Newsstand, The Chapeau, and Uptown Jewelers.

If you end up making some purchases and you’re staying on property, ask the Cast Member at the check out to have your packages sent to your hotel if you’re staying on property; if you’re not staying at one of the Disney resort hotels, you can have your bags held at the Main Street Chamber of Commerce where you can pick them up at the end of the day.

One of the best things to do in Magic Kingdom before Rope Drop is totally free. You can take photos in front of Cinderella Castle with hardly anyone around! Other icons like Main Street USA and the Partners Statue provide great photo ops! If you can get everyone in the picture on your own, remember Disney doesn’t allow selfie sticks, don’t worry! The PhotoPass Photographers are there early too. They’ll snap several pictures for your PhotoPass, which is free but you have to pay for the photos or a MemoryMaker, and they’ll even take one or two with your phone!

You can always check out your PhotoPass Photos on your MyDisneyExperience app anytime!

Even some seasoned Disney fans, especially those who like their beauty rest, are unfamiliar with Rope Drop.

Rope Drop is more than just the time that the park opens, though this time does mark official opening for the day; there’s a Rope Drop ceremony every morning with characters and even some fanfare with fireworks. A while back, the show was more official with actual ropes being dropped at the Walt Disney World Railroad Main Street Station. However, that ceremony is gone, and Cast Members have started letting guests into the park before this time.

In the Magic Kingdom, there is still a “Rope Drop” ceremony called Let the Magic Begin.  It’s held at Cinderella Castle and The Hub, which is actually a good thing because it allows more space for those who want to see the show.

So your last thing to do before “Rope Drop” is get your spot for Let the Magic Begin! It’s a great way to start your Disney Day!

After Rope Drop, or before if you don’t care to see the show, head to your favorite attraction – or get as close as possible. I’ve walked on many attractions this early in the morning, and you can even ride the same or different attraction at least a couple times (sometimes without even getting off between rides) before the lines start to build.

One trick is to head to the back left corner of the park (I’m looking at you, Splash Mountain and Big Thunder Mountain). Since most people will enter and naturally go to the right, you’ll be in front of them all day and circle back around to the “beginning” of the right-way goers later in the evening when most other people are on the left side of the park. At the end of the day, take the World Disney World Railroad back to the front of the park to avoid having to walk all the way back around the park.

Do you get up early while on vacation in Disney World?