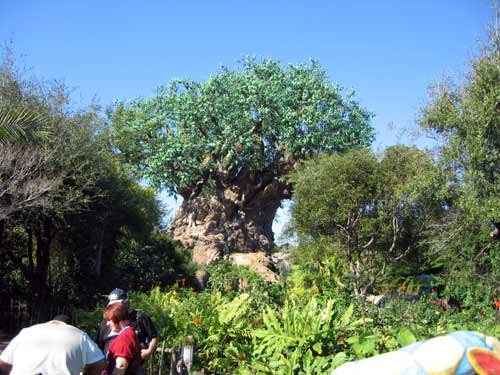 When Disney’s Animal Kingdom opened in 1998, it faced the normal challenges of the other Disney Parks including adequate transportation services like bus stops and parking and creating an area that is cohesively themed yet interesting to guests of all ages. But there was another challenge: humans wouldn’t be the only living things in the parks! Real animals would be brought into a Disney Park for the first time in the company’s history.

Animal Kingdom is too often overlooked and underrated. It is beautifully themed and maintained despite the amount of behind-the-scenes work required to keep it up.

Many things in Animal Kingdom aren’t what they seem, and the trees are no exception.

On the African Savannah, flat-top Acacia trees are a common thing to see, but they are not common or even found in Florida. Instead, Disney planted Florida oak trees on their savannah, and the trees are trimmed to look like they have flat tops.

The most famous tree in Walt Disney World is Animal Kingdom’s Tree of Life, but no part of this tree is natural. It is 145 feet tall, 50 feet wide, has 103,000 leaves, and is completely man-made. The leaves were even attached by hand. The tree has to withstand Florida weather including chilly winters, tropical summers, and even tropical storms.

The trees aren’t the only things that Disney fakes. The “asphalt” in Dinoland is actually treated concrete. The cracks are even fake! Asphalt would be the most common thing to see in a cheap carnival-type setting, but the extreme heat in the summer could melt asphalt, and things could even sink into when it melts.

The Oasis area of Disney’s Animal Kingdom features lush, tropical gardens with pathways to interesting animals. It was originally called Genesis Gardens, but Disney changed the name because they were afraid that it was too much of a religious connotation alluding to the Garden of Eden.

On the real African Savannah, the animals roam together, but that isn’t realistic in Disney because of unmentionable dangers. In order to keep all of the animals safe, Disney masks camouflaged fences, impassable bridges, and water barriers.

It’s not just the animals that Disney is worried about. You know those lions that seem really close while you’re driving through the Kilimanjaro Safari? There is actually a huge moat separating them from you. It is 18 feet deep and 21 feet wide, and they can’t cross it.

The lions on the Safari originally came from Oregon, which has a completely different climate from Florida. They had a hard time adjusting to the heat, so Imagineers installed air-conditioning on their rocks. Although they appear to be sunbathing, they’re actually quite cool.

Tigers are pretty lazy creatures preferring to sleep up to 20 hours a day. To keep them awake and active, Disney trainers use enrichment techniques including randomly adding new things to their environment. The idea is that they naturally will be inclined to explore the new items thus keeping them active for guests to see.

Disney trained the bats in the Maharajah Jungle Trek to respond to an audio cue. When the trainers blow a dog whistle, which is too high-pitched for us to hear, they come inside for food. Bats aren’t the only animals trained to respond to audio cues, though. A couple hours before the park closes, trainers start cuing animals to return to their indoor environments. Each species has a different cue, and cues including things like drums, bells, whistles, etc. While the animals are backstage for the evening, gardeners replenish and prune on-stage areas to keep up with the animals’ eating habits.

What is your favorite thing about Disney’s Animal Kingdom?