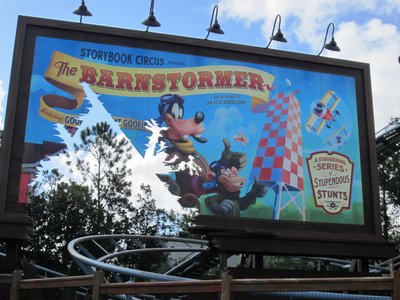 Disney World is well known for having rides that the whole family can enjoy together. In fact, a major reason why Walt created Disneyland, and subsequently Disney World, was so that families could enjoy fun things as a group, instead of adults standing off to the side, watching as children have a good time.

In recent years Disney has also added plenty of thrill rides – you know, the kinds of attractions that the teens love, and which are far too intense for older folks. Attractions like the Hollywood Tower Of Terror and the Rock N Roller Coaster at Disney’s Hollywood Studios come to mind.

What about those who are looking for a step between It’s A Small World and the Tower Of Terror? Fortunately, Disney has five great attractions that I call “starter thrill rides.” They aren’t for the smallest guests, those who are easily frightened, or whose stomachs are especially delicate, but they are far tamer then going 0 to 60mph in four seconds before getting turned upside down multiple times.

For kids who are just a bit adventurous and are looking for a thrill on a small scale, the Barnstormer in the Fantasyland section of the Magic Kingdom is a great place to start. It is a roller coaster, but a very tame one. It is a short ride, and all throughout, you can see what is coming next so there are no surprises. It’s also a relatively small ride, so it isn’t intimidating like some of the more thrilling “Disney mountain” rides like Space Mountain or Expedition Everest at Disney’s Animal Kingdom. It’s the perfect first roller coaster for kids.

Calling Soarin a thrill ride may be a bit of a stretch. Aside from the ascent and the descent at the beginning of the ride, there actually isn’t that much movement in this Epcot favorite – it’s all created in your mind as you watch the huge movie screen which takes up your field of vision. You will also see plenty of folks with gray hair on this ride, as well as people who rolled up in wheelchairs or ECVs, but the mental experience of flying – as Disney presents it – can be a thrill and a great way to see how kids or skittish adults will deal with a thrill. The ride is a personal favorite: it’s fun, it’s innovative, and somehow it never seems to get old. The long lines year after year testify to that.

Definitely a step up from the Barnstormer, Big Thunder Mountain includes several larger lifts, more speed, and more turns. It is a great roller coaster for kids or really anyone who is ready to try a more adult thrill, but not one that turns them upside town or hurls them through space. Plus, you get to enjoy the great Disney tradition of details and theme, taking you to the American Wild West.

The big thrill in this ride is the drop; it’s 52 feet and is accentuated with water cannons and an ominous introduction before it happens, but overall, the fun itself is focused on animatronic critters, scenes of the south, and a bit of singing. Splash Mountain is a good next step after the Barnstormer or Big Thunder Mountain.

You might debate if Test Track is really a starter thrill ride. After all, it reaches speeds of up to 65 miles per hour. Then again, so does your car, and it probably did so on the ride into the park that morning. Test Track has a fun story, some bumps, some turns, and some speed, but it isn’t scary, and isn’t dark in the same sense as some of Disney’s more thrilling attractions. If your adventures-to-be handle things like Splash Mountain and Big Thunder Mountain well, going for a spin on Test Track is a good next step before moving on to the big leagues in attractions like Mission Space.

What is your favorite starter thrill ride?