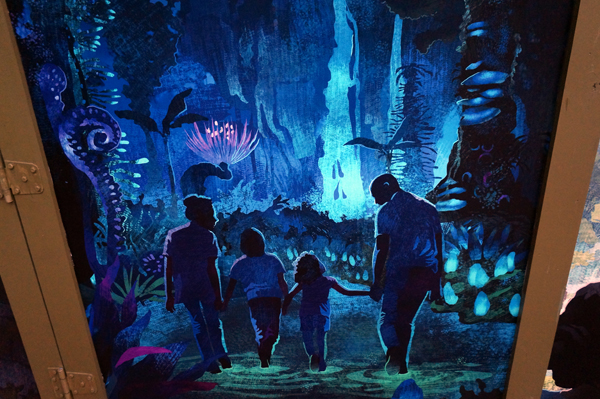 Disney World fans have been waiting in patient anticipation for almost six years to see what Pandora would look like brought to life.

Disney announced way back on September 20th, 2011 that Pandora: The World of Avatar would be coming to Disney’s Animal Kingdom sometime between 2017 and 2019 at a cost of about $500 million dollars.

Now, we know that the Avatar-themed land will be opening in the Summer of 2017!

Let’s take a look at what we can expect from Pandora: The World of Avatar!

Even Disney Imagineers say that they were skeptical that they could create Pandora. After all, bringing floating mountains, glowing plants, alien creatures, and flying banshees to real life is quite an undertaking. James Cameron, who first conceived Avatar in 1995, said he couldn’t believe that something that only existed in his imagination is coming to life.

Nevertheless, they say that they’ve accomplished their goal and that they’ve created a real world, immersive experience that doesn’t exist anywhere else in the world, much less in any other theme park.

Imagineers have used the latest technology to create The World of Avatar. At its heart is a massive command center that controls hundreds of bioluminescent plants, a boat ride, and an exciting flying ride. They say that the technology transcends any one specialty and incorporates the best minds of mechanics, engineers, robotics, and design specialists.

Within this amazing land, there will be two attractions.

The Na’vi River Journey is a “lyrical” boat ride through the bioluminescent forest. Guests will see the glowing plans an audio-animatronics of the animals of Pandora like you’ve never experienced before. The attraction also reportedly has some small drops. Watch the video to get a sneak peak at this beautiful attraction!

The second attraction is called Avatar: Flight of Passage. If you watched the movie Avatar, you’ll remember that the Na’vi people had to find their banshee match. If the banshee didn’t choose them, it wasn’t a proper match. Once the match occurred, the Na’vi would fly through the air with the banshee. Now, you’ll get the opportunity to ride a mountain banshee in this flying simulator attraction. In the video link above, Imagineers say the Arkon will fly, dive, and soar through the landscape of Pandora. I can only imagine that the ride will have some semblance to a cross between Epcot‘s Soarin‘ and Star Tours in Disney’s Hollywood Studios.

Disney knows that Pandora will expand the list of attractions in Disney’s Animal Kingdom, and the area will be much more impressive at night when the park is darker.

To make Animal Kingdom an all-day park, Disney knew they needed to add a nighttime spectacular to the line up, so they created Rivers of Light.

Rivers of Light, which will take place on Discovery River with water features, light projections, and boats, was scheduled to open in April 2016 but there were some hold ups. Now, Disney says that the nighttime show will open sometime in 2017. Maybe the two opening dates will coincide?

Will you visit Pandora: The World of Avatar at Disney’s Animal Kingdom?