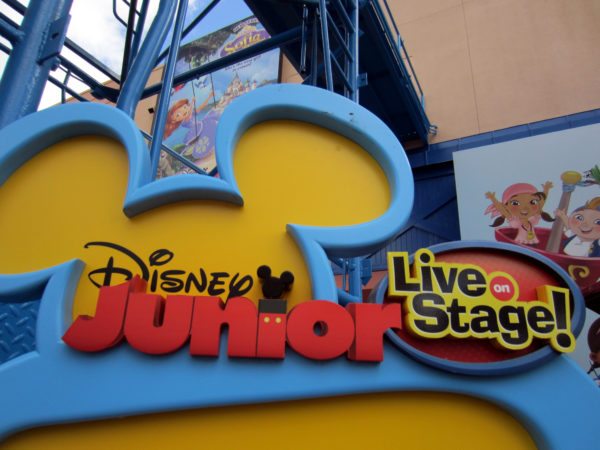 Where to Find Disney Junior Characters in Disney World

For six years, Disney Junior shows have been delighting toddlers and parents with their original first-run series including Doc McStuffins and Mickey Mouse Clubhouse. The shows are aimed at kids younger than 8 years of age, but, if we’re being honest, parents really like the shows, too.

Have you ever caught yourself watching even after your little one goes to sleep just to find out what happens? You’re not the only one.

So, if you’re heading to Disney World with your little ones, you’ll want to know where to find these lovable characters. Let’s take a look at the Disney Junior spots in Disney World!

Disney Junior – Live on Stage! in Disney’s Hollywood Studios Animation Courtyard is the best place to fine Disney Junior characters not only because of the sheer volume of characters who can be found here, but also because it’s one of the most entertaining experiences you can have in Disney World with your toddler.

Disney Junior characters including Jake, Sofia, Doc McStuffins and friends, Mickey Mouse, Handy Manny, and Little Einsteins come together to celebrate Minnie Mouses’ birthday! Casey hosts as they all learn about teamwork to put together a fun surprise party.

Your kids will love these toddler-sized puppets and the special surprises like bubbles and streamers. There are no seats in the theater, so be prepared to sit on the floor, but this means there’s plenty of room to dance around as they sing along.

If this is a must-do on your list, you can get a FastPass+, but in this big of a theater, you’ll hardly need it.

Hollywood and Vine opens its doors early in the morning for Disney Junior characters and their guests for the Play ‘n’ Dine Character Breakfast.

You’ll get to enjoy a buffet of all this as your favorite Disney Junior characters like Jake, Sofia, Doc, Handy Manny, June from Little Einsteins, and Special Agent Oso mingle, sign autographs, and pose for pictures.

Between plates, there will be musical interludes so your restless little ones can get up and dance with the characters.

This character dining experience used to be available for breakfast and lunch, but they will only be there for breakfast now as Minnie is taking over lunchtime. This is a popular meal, and with one meal time being cut, you’ll want to get your Advanced Dining Reservations in early!

Just outside of Disney Junior Live on Stage also in Animation Courtyard is a character meet and greet with Jake, Sofia, and Doc. The characters are there most of the day, so it’s a great place to just stop by or visit while you wait for the next show to start.

Rafiki’s Planet Watch in Disney’s Animal Kingdom probably isn’t the first place you’d think to find Disney Junior characters, but it is a good place to stop, and it’s normally less crowded than most other places in Disney World.

Here you can meet Rafiki, who appears on Disney Junior’s Lion Guard. Rafiki will pose for pictures and sign autographs, and he also loves to hear about your connections with wildlife or wild places.

Doc McStuffins also meets and greets guests here, and she might even give you a checkup! She is located in Conservation Station.

On the waters, just outside of Magic Kingdom is a fun cruise for anyone who likes pirates and their sidekicks. It sails from Disney’s Contemporary Resort Hotel every evening and allows for some amazing views of the Happily Ever After fireworks show.

Captain Hook and Mr. Smee are on board to tell stories of their adventures as you enjoy snacks like cotton candy, cake, pretzels, chips, fruit, and ice cream bars.

Princess Elena of Avalor is a favorite Disney Junior princess, and now you can meet her along with Disney’s classic princess, Cinderella, in Princess Fairytale Hall in Magic Kingdom.  Check the schedule for your travel dates, since Disney makes changes in the Hall occasionally.

Right now, there aren’t any places to meet characters from PJ Masks, Miles from Tomorrowland, Octonauts, or the new Puppy Dog Pals.

These are all big hits on the Disney Junior Channel, so hopefully Disney will add them to the meet and greet line-up soon!

Do you look for Disney Junior characters at Disney World?