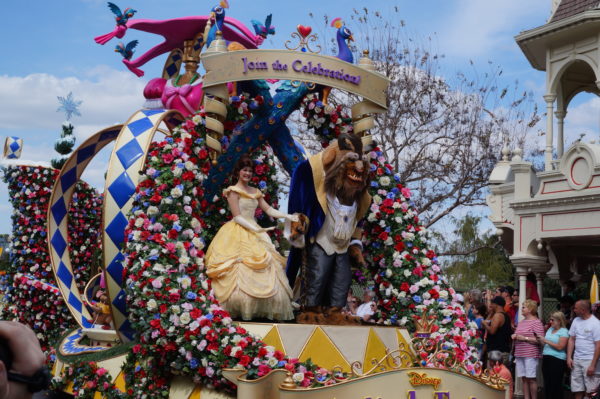 Festival of Fantasy Parade- Beauty and the Beast

The three-o’clock parade has a long history in Magic Kingdom, but they weren’t always at 3:00. However, since 1985, parades have traditionally been at that time.

Now, Disney World is changing the time of Magic Kingdom’s Festival of Fantasy parade from 3:00 PM to 2:00 PM. Festival of Fantasy floats will start at Frontierland at 2 PM, continue through Liberty Square, snake around Cinderella Castle hub, travel down Main Street USA, and end in Town Square. This parade is only 12 minutes long, so take this into consideration when choosing your parade spot (or route around) during this time!

Why the time change? Because it’s party season!

Mickey’s Not So Scary Halloween Party kicked off August 16th, which was the first day that the Festival of Fantasy Parade was scheduled at 2 PM instead of 3 PM. This change will stay in effect through the end of the year as Mickey’s Very Merry Christmas Party follows the Halloween party.

Festival of Fantasy will reportedly return to its 3:00 time-slot in January 2020!

Festival of Fantasy time change from 3 to 2: a good idea?