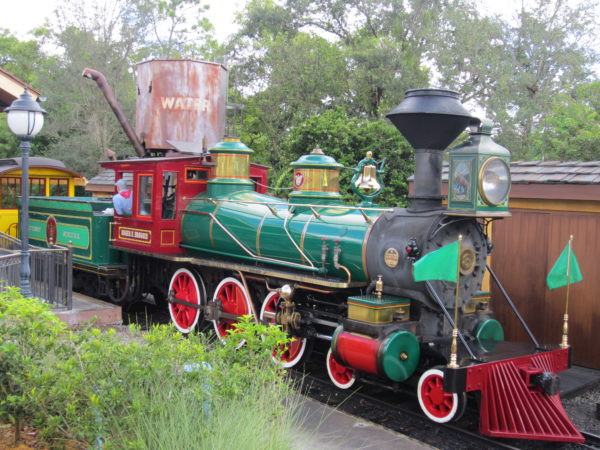 It’s no secret that Walt loved trains. To meet the requirements of a family-friendly park with an All-American feel, a locomotive was a necessity! WED Enterprises answered the call and discovered five locomotives in the Yucatan in Mexico based on a tip about a railroad boneyard. The trains were shipped to Florida where they were restored to operating condition and made to resemble the steam trains of the 1880s. They also built passenger cars from scratch.

The Walt Disney World Railroad is a three-foot narrow-gauge heritage railroad. There are four trains including the Walter E Disney, the Lilly Belle (named after Walt’s wife, Lillian), the Roger E. Broggie (in honor of the Walt Disney World Railroad Founder), and the Roy O. Disney (Walt’s brother and business mastermind). Each locomotive holds an engineer and a fireman and pulls five cars. Each car holds 75 people for a total capacity of 375 guests per train. On the back of each train is a conductor supervising the passengers.

The four trains at Walt Disney World burn 25 gallons of fuel and 200 gallons of water per hour, which is merely a fraction of what they hold, which is 664 gallons and 1,837 respectively.

Any three of these locomotives can run at a time on the 1.5-mile loop around Magic Kingdom. It takes about 20 minutes to make a loop, and you get to see some unique views of the park including “backstage” areas that you can’t walk to.

Besides that, at least two and sometimes three trains run all day every day making it one of the most popular steam-powered railroads in the world hauling 3.7 million passengers every year.

There are three stations on the Walt Disney World Railroad including Main Street USA, which was, for nearly a year upon opening, the only stop on the railroad.

On May 1, 1972, Frontierland Station opened near Pecos Bill Tall Tale Inn and Café. That station was demolished in November of 1990, and Splash Mountain was constructed on its land. The station was moved to the right and reopened in December 1991.

The third WDW Railroad station opened on June 18th, 1988. The land was then called Mickey’s Birthdayland and sat adjacent to Fantasyland. In 2004, the station was demolished and rebuilt. When New Fantasyland acquired the area that was then Mickey’s Toontown Fair, the station was renamed Fantasyland Station and reopened as such on March 12, 2012.

The Future of WDW Rail Road

The Walt Disney World Railroad closed temporarily to accommodate the construction of the Tron Lightcycle Power Run specifically because of the location of the Fantasyland Station in relation to the Tron construction.

At this point, there is no reopening date for this attraction, but you can bet when it does reopen, lots of people are going to want to ride!

If you’d like to get a closer look at the WDW RR, book Disney’s The Magic Behind Our Steam Trains Tour. There is one tour group daily, and those lucky guests get access to the roundhouse, a backstage area that can only be seen on this tour.