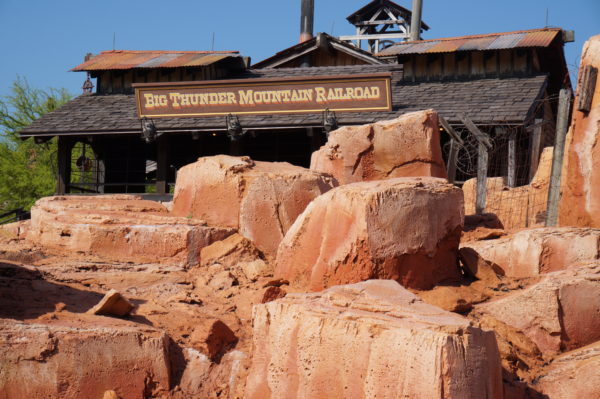 Frontierland is a more cohesive land than Adventureland which immediately precedes it in clockwise order around Magic Kingdom. Frontierland was an opening day land, but there were only three attractions including a stop on the Walt Disney World Railroad, Davy Crocket’s Explorer Canoes (which closed in 1994), and Country Bear Jamboree. Tom Sawyer Island didn’t open until 1973, and Splash Mountain made its first drop in 1991.

Big Thunder Mountain opened in 1980.  It is my favorite attraction in this land.  It opened after an entirely different pavilion was planned for this area – more on that later.

Big Thunder Mountain was part of a larger plan for what would be a western-themed pavilion called Western River Expedition. This pavilion would house several rides including a runaway railway mine train coaster, but after Pirates of the Caribbean proved to be more expensive than originally planned, Imagineers decided to take just one good idea and run with it.

Big Thunder Mountain Railroad was the result. It sits on two and a half acres and features intricately carved rock work. It was the goal of the Imagineers to make it look like the train track was dug into and around the rocks. The coloring of these rocks is inspired by Monument Valley, and the track is a mirror image of the Disneyland track.

As the story goes, sometime in the late 1800s, gold was discovered on Big Thunder Mountain. As a result, a small town, called Tumbleweed, grew into a booming mining town. The building, which houses the queue, looks like an old mining company office. The office is run by mine owner Barnabas T. Bullion, who strikes an odd resemblance to Walt Disney Imagineer Tony Baxter.

Jason Chandler, inventor, also presides. When these changes appeared in 2013, it was the first stateside reference to the Society of Explorers and Adventurers, Disney’s secret society.

The town was built on sacred Native American land and was cursed, but the miners didn’t know this. Their mining work caused a great flood that left the town abandoned, but that’s not all! The train cars that were part of the mining effort became possessed and would now travel on their own. Some enterprising locals, though, founded Big Thunder Mountain Railroad to allow visitors to take rides on these possessed trains in “the wildest ride in the wilderness”.

Neither of these backstories is communicated directly to guests, but knowing the story behind the rides helps to more fully appreciate and understand them as we ride!

What’s your favorite attraction in Frontierland?