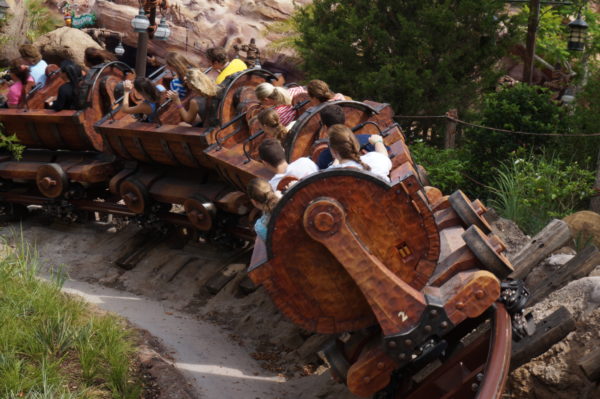 Fantasyland is one of the most popular lands, as a whole, in all of Disney World. It is located behind Cinderella Castle and is accessed from Tomorrowland, Liberty Square, pathways on the sides of the castle, or by going through the castle itself.

Fantasyland is sometimes referred to as New Fantasyland because the whole land received a massive expansion, the largest Disney had ever done at the time, starting in 2010. It was partially reopened in 2012 and completed by 2014.

This expansion closed some attractions including Mickey’s Toontown Fair, Pooh’s Playful Spot, and Snow White’s Scary Adventures. It also resulted in several new and still very popular attractions including Be Our Guest Restaurant, a second Dumbo the Flying Elephant ride, and my favorite attraction in this land, Seven Dwarfs Mine Train!

Let’s take a look at Seven Dwarfs Mine Train!

Seven Dwarfs Mine Train opened on May 28th, 2014 as the final piece of the New Fantasyland expansion effectively completing the land.

Seven Dwarfs Mine Train now sits on the spot that was 20,000 Leagues Under the Sea from opening day through 1994 and then Pooh’s Playful Spot until 2010. The ride is inspired by Walt Disney’s first traditionally animated feature film, Snow White and the Seven Dwarfs, but it’s not the first attraction to be built in the area based on that movie. Snow White’s Scary Adventures, which many say was entirely too scary for Fantasyland, operated where Princess Fairytale Hall is now from opening day through May 2012.

Seven Dwarfs Mine Train is a steel rollercoaster, but it is a family-friendly ride with a minimum height requirement of 38”. In fact, besides The Barnstormer, which has a height requirement of at least 35”, it’s the lowest height restriction of similar rides in all of Disney World often making it the first coaster for many kids!

Seven Dwarfs Mine Train has a really cool interactive queue! First, you can make your own music with musical spigots. Second, once inside, you can spin the barrels and project animations on the ceiling. If all of the barrels are spinning at the same time, Snow White will appear in the middle of the animations! If you have a FastPass+ reservation, you’ll skip the interactive queue, though.

The ride vehicle is one of the most unique! It looks like a mine car, and it is not attached to the bottom. Instead, it’s attached on the front and back to allow the cars to sway, which is authentic to the way an actual mine cart is constructed. This makes for a very smooth ride compared to fixed-car coasters.

The ride has both indoor and outdoor scenes, and you get to see audio-animatronic versions of all of the dwarfs and hear some recognizable songs from the movie like Heigh-Ho and the Yodel Song. A really cool touch that most people don’t realize is that the final scene was salvaged and recycled for this attraction. The old witch is knocking on the door with the poison apple and Snow White and her Dwarfs are singing inside the cottage.

This is such a cool attraction! You’re sure to be smiling the whole time, which is good because there are two ride cameras offering both video and photos. It’s one of only two attractions in Disney World to offer this- the other being Twilight Zone Tower of Terror.

This attraction was built with the MagicBand system in mind. Unlike older attractions, there aren’t any monitors at the end of the ride to view the photos and no store to buy them. Instead, the photo and video automatically connect to your MagicBand using RFID technology. If you have the MemoryMaker, you will get all of these photos and videos at no additional cost, but you can also buy them individually.