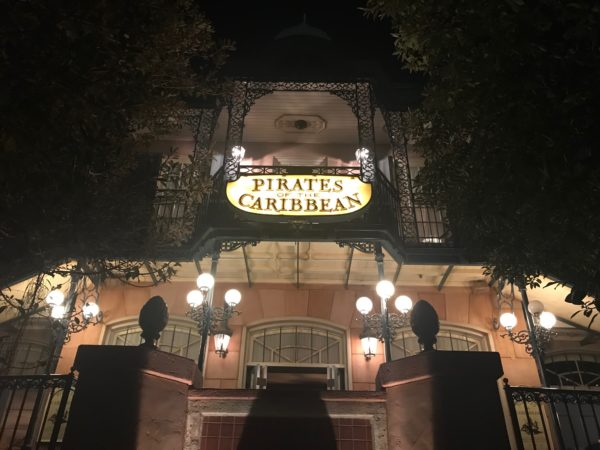 Pirates of the Caribbean

Adventureland is one of the lands in Magic Kingdom. If you walk down Main Street USA and turn to your left, Adventureland is the first land you’ll encounter. You’ll cross a wooden plank bridge and walk under a sign welcoming you to Adventureland.

This is an interesting area because it brings together the jungle in Jungle Cruise, a tropical island in The Enchanted Tiki Room, and a desert oasis in The Swiss Family Treehouse and Magic Carpets.

My favorite attraction in this area, though, is Pirates of the Caribbean!

Pirates of the Caribbean

Pirates of the Caribbean is one of the most popular attractions in Walt Disney World, but rides with similar names are located in Disneyland in California, Tokyo Disneyland, Disneyland Paris, and Shanghai Disneyland.

The Shanghai version of the attraction is very different from the one in Disney World.  Check out this Youtube video of the ride in mainland China:

Pirates of the Caribbean first opened in Disneyland in 1967, and it was the last attraction that was directly overseen by Walt Disney himself. However, he didn’t get to see the completed attraction because he died just months before it opened. The second floor of the Disneyland version was supposed to be an apartment for the Disney family, but it opened as an art retail and museum location instead. In 2007, it became a Disneyland Dream Suite.

A very similar version opened in Magic Kingdom in 1973. Interestingly, this attraction has undergone more changes than most other rides. In fact, it inspired a film, then received refurbishments based on additional movies in the series.

The queue is located in this fort. The queue was specifically designed for this version of the ride and features two sides: a soldier side and a pirate side. The pirate side is on the right of the fort and serves as the FP+ queue while the soldier side serves as the Standby queue. Both queues come together in the loading area called Pirates Cove.

The ride itself is a dark boat ride inspired by the popularity of it’s a small world. It holds 630,000 gallons of water and takes three days to empty. There are more than 120 audio-animatronic animals, birds, pirates, and villagers throughout the attraction plus projections. There are a couple of small drops, so it’s thrilling enough but not too scary. It’s fun for the whole family!

While this attraction has changed pretty significantly through the years even softening some potentially offensive elements, this has remained a very popular mainstay in Disney Parks and especially Magic Kingdom.

What’s your favorite attraction in Adventureland?