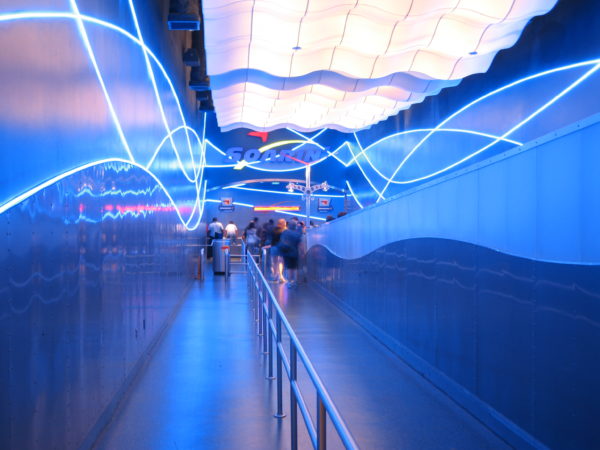 EPCOT is in a state of flux at the moment. When Walt first proposed EPCOT, it was supposed to be a real living and working city.  When he passed away before these plans could come to fruition, his Imagineers were left with some hard decisions. Without their leader, they decided that they were not prepared for such an undertaking.  Eventually the company made EPCOT into a theme park.

The park has two sections – Future World and World Showcase – and multiple attraction pavilions and country pavilions (respectively) in each. Future World honors the past, present, and future of science and technology in attractions like Spaceship Earth, where you can learn about the history of communication, Imagination!, where you can go inside your imagination, Mission: SPACE, which takes you to space in a simulator, The Seas, and The Odyssey Pavilion, which is currently a preview space for what’s to come in the major overhaul of the park. You can also see the monorail buzzing by overhead and some cool shops and eateries.

My favorite attraction in Future World, though, is located in The Land Pavilion. This pavilion houses a couple of attractions including Living with the Land, where guests can take a boat ride through a greenhouse and learn about the history and future of gardening, and my favorite, Soarin’ Around the World.

Soarin’ Around the World

Soarin’ Around the World, or Soarin’ as it’s often called is a hang gliding similar attraction with a mechanical lift system and a projected movie on an 80 ft concave, 180-degree screen.

Soarin’ was first imagined in 1996. It was to include three loading levels and a horizontal cable to hold the ride vehicles. It was determined that this idea was too expensive, so, exhausted and out of ideas, the Imagineers went home for Christmas break with their families.

While at home, Imagineer Mark Sumner was playing with an Erector Set that his son had gotten for Christmas when he had a revelation! He created a working model of Soarin’ with his son’s Erector Set and a string. Since Mark’s version would load on one level, it was more labor- and cost-effective. His fellow Imagineers loved the idea and got to work. The result was the first flying theater with three rows of seating and three vehicles. It was built with one million pounds of steel with 37 tons lifted during each ride cycle. The attraction first opened on May 5th, 2005, which is why you might hear the Cast Member Flight Attendants welcome you to Flight 5505.

The resulting ride holds 87 guests at a time and leaves guests dangling freely as they fly through the air. The seats move slightly and the image on the screen turns slightly to create the illusion of flying.

With an update of the show, Disney added a new score, which is very similar to the original.  The London Studio Orchestra recorded the soundtrack. It also includes an entirely new film where guests visit six continents and see various landmarks and locations many of which inspired attractions and movies.

Sites include the Matterhorn in Switzerland and Italy, which inspired Walt to create Matterhorn Bobsleds in Disneyland, Isfjord in Greenland, Sydney Harbor in Sydney, Australia, a prominent feature in Finding Nemo, Neuschwanstein Castle in Bavaria, Germany, which was a primary inspiration for Cinderella Castle in Magic Kingdom, Kilimanjaro National Park and Mount Kilimanjaro, Tanzania, which inspired Kilimanjaro Safaris in Disney’s Animal Kingdom, The Great Wall of China in China, which is featured in Mulan, The Great Pyramids, Egypt, the Taj Maal in Utter Pradesh, India, West and East Mitten Buttes in Monument Valley, Arizona, Lau Islands in Fiji, Iguazu Falls in Argentina, and the Eiffel Tower, Paris.

The ride ends in a view of the appropriate park for your location, which was a welcome feature for many since the original attraction ended in Disneyland, which didn’t make sense to many fans. While there are some CGI elements in the transitions, the scenes are very real.

It’s not just the awesome views that make me love this attraction, though! It is multisensory! In the Taj Mahal scene, you’ll smell rose blossoms plus grass in Africa and sea breeze in the South Pacific.

The fact that this attraction has so much to offer makes it my favorite in Future World!