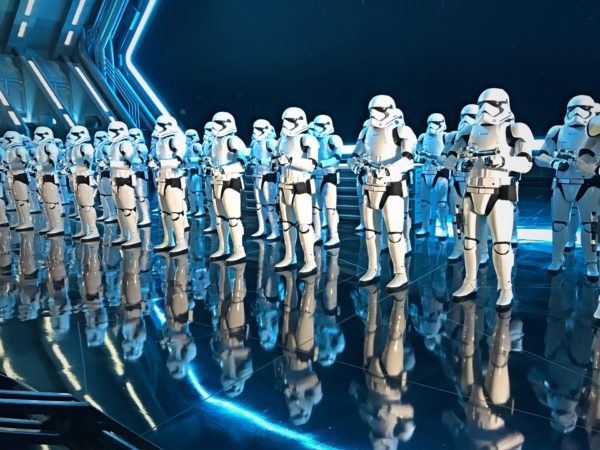 Galaxy’s Edge is a 14-acre land located in Disney’s Hollywood Studios set on a remote frontier planet of Batuu in the Black Spire Outpost Village. The area was announced on August 15th, 2015, construction began on April 14th, 2016.  The Disneyland version opened on May 31st, 2019 and the Disney’s Hollywood Studios version opened on August 29th, 2019. This vibrant trading port is full of attractions, shops, restaurants, and entertainment that challenges reality in every way possible.

Walt Disney Imaginers took inspiration from real-life locations including Istanbul, Morocco, and Jerusalem in its architecture, culture, and weather, and ignored the norms of theme park construction by adding signs in Aurebesh instead of English, leaving out traditional attraction marquees, and excluding Star Wars-branded merchandise from the land. Galaxy’s Edge feels very much like an ancient land!

There are two attractions in this area including Millennium Falcon – Smugglers Run and, my current all-time favorite Disney attraction, Rise of the Resistance.

There are also plenty of dining and shopping locations inspired by the Star Wars movies including Oga’s Cantina, Ronto Roasters, Kat Saka’s Kettle, Savi’s Workshop, Dok-Ondar’s Den of Antiquities, Droid Depot, Creature Stall, and Toydarian Toy Shop. You can even try blue and green milk at The Milk Stand!

Star Wars: Rise of the Resistance

Star Wars: Rise of the Resistance is a unique attraction that combines four different ride systems including a walk-through section, a trackless ride vehicle, a motion simulator, and a drop system plus audio-animatronics, projection mapping, and more. This is, by far, one of the most complex ride systems that Disney Imagineering has ever created, which was evident by the several breakdowns in the early days of its opening on December 5th, 2019.

The ride puts guests right in the middle of a battle between the First Order and the Resistance. The queue takes you, a new recruit, into the ancient caves that house a Resistance Control Center. You’ll receive a mission by BB-8 and a hologram version of Rey to rendezvous with General Leia Organa, but something goes wrong and you’ve been captured by the First Order! As Kylo Ren and Armitage Hux discuss your pending interrogation, the Resistance mounts a rescue effort. As you board a hijacked First Order Fleet Transport, an eight-person vehicle piloted by an R5 unit, your adventure is about to get a lot more exciting. Without spoiling it for those who haven’t gotten to ride, the rest of the ride has the Resistance trying to rescue you from the grips of the First Order.

The ride has been hugely popular. The attraction opened first at Disney World and introduced a virtual queuing system. Months after the opening, the boarding pass system was still drawing massive crowds with boarding groups filling up right after the park opened. I can only imagine that the popularity will continue when the park reopens after the Coronavirus forced the parks to close for weeks during one of Disney’s busiest times of the year.