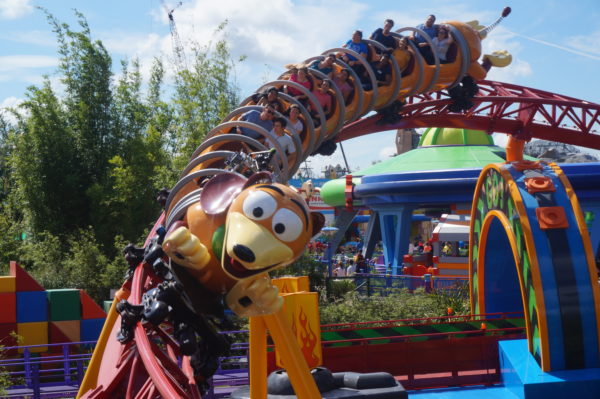 Disney announced that they would be building Toy Story Land at the 2015 D23 Expo. The land would be based on the hit Disney*Pixar Toy Story movies. Construction began on April 3rd, 2016, and the land opened on June 30th, 2018.

There are also Toy Story Lands in Walt Disney Studios Park at Disneyland Paris, Hong Kong Disneyland, and Shanghai Disneyland. The version at Disney’s Hollywood Studios in Walt Disney World is the largest of the four such lands scattered across the globe.  It comes in at 11 acres!

The land also introduced the Green Army Men Drum Corps who walks through the land playing the drums and also conducts a Boot Camp complete with drills, chants, and making guests honorary Green Army Men. You can meet and greet beloved Toy Story characters like Buzz Lightyear, Woody and Jessie, and Bo Peep. Dining in the land is limited right now, but Woody’s Lunch Box is a unique quick-service option that opened with the land. Disney promises a table-service restaurant called Woody’s Roundup Rodeo BBQ will open soon. It was scheduled to open sometime in 2020, but the Coronavirus closure might change the timeline for that. The construction incorporated Toy Story Mania! and even gave the attraction a new entrance. Other attractions in the land include Alien Swirling Saucers, themed after the famous claw game, and my favorite, Slinky Dog Dash!

Slinky Dog Dash is a family-friendly rollercoaster set in Andy’s backyard. It’s built out of a Dash & Dodge Mega Coaster Kit, which Andy apparently won at Pizza Planet, and he made his Slinky Dog toy the ride vehicle. While Andy’s away, the toys have decided to run the coaster themselves. Since you have been shrunk to the size of a toy, you can ride on Slinky Dog’s back and whip around this fun coaster!

The coaster has two launches and can run four trains at a time. It looks pretty daunting, but it’s actually a very fun and very smooth ride! It ends with the first-ever audio-animatronic version of Wheezy the Penguin who serenades you at the end of the ride while you’re waiting to enter the unload area.

Slinky Dog Dash is a Tier 1 FastPass+ attraction and remains one of the hardest to get FP+ reservations and one of the busiest attractions in the parks even after Star Wars: Galaxy’s Edge opened. I highly recommend checking out Slinky Dog Dash!