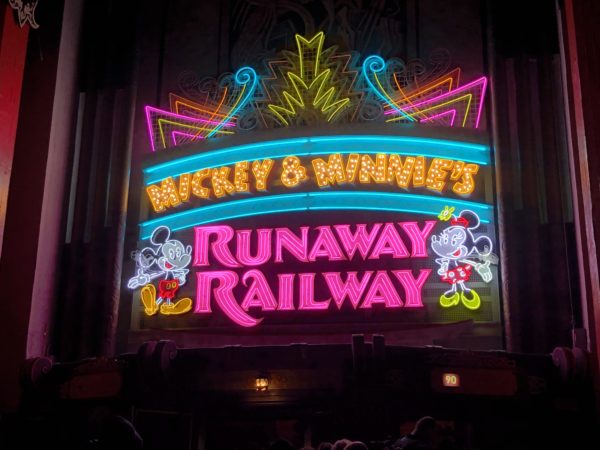 It’s the only attraction in this area, but it’s already a classic!

Mickey and Minnie’s Runaway Railway hosted the media on March 3rd and opened officially to the public on March 4th, 2020. This attraction is brand new and was open barely a week before the parks shut down due to the COVID-19 pandemic.

This trackless dark ride is zany, unexpected, and totally Disney!

The attraction happens in two parts. First, you’ll enter a theater where you’ll see the world premiere of the Mickey short “Perfect Picnic”. Mickey and Minnie are heading out for a perfect picnic! What could possibly go wrong? Well, you might be surprised! Minnie’s pie ends up clogging Goofy’s train stack. When the train blows up, it blows a hole into the screen!

You walk through the screen and onto the second part of the ride. Here, you’ll board a train engineered by Goofy. Hold onto your hats (literally) because you’re about to be blown away (literally!).

You’re transported into a Mickey short cartoon where you’ll see adorable audio-animatronic versions of Mickey, Minnie, and Daisy and video versions of lots of other Disney friends!

Nothing can stop us now!

At the end of the attraction, you’ll see a screen displaying the classic cartoon ending: “The End” reinforcing the feeling that you were inside a Mickey Shorts cartoon!

Did you get a chance to ride Mickey & Minnie’s Runaway Railway?