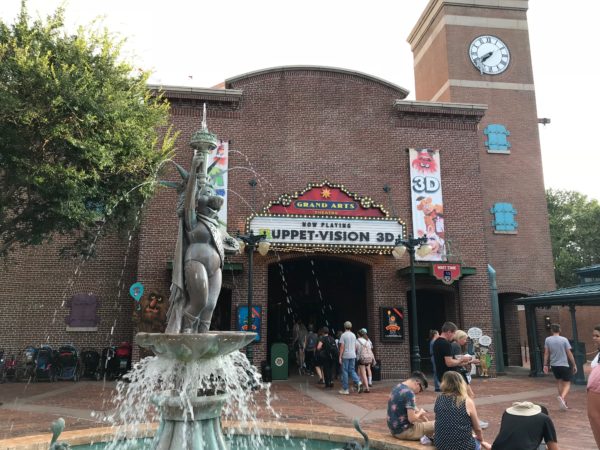 Disney’s Hollywood Studios is one park where art truly reflects life. Grand Avenue, formerly an area near the now-gone Streets of America, is evidence of this.

Grand Avenue was originally supposed to be called Muppet Studios, and there were more Muppet-themed attractions and restaurants planned for this area.  The original plan for the acquisition of the Muppets fell through after Jim Henson’s death in 1990. Disney did eventually acquire Jim Henson’s studio including the Muppets in 2004.

The only attraction in this area that was ever built was Muppet*Vision 3D. There are, however, a food and beverage locations.  These include the Muppet-themed PizzeRizzo, as well as the non-Muppet Mama Melrose’s Ristorante Italiano and BaseLine TapHouse.

Muppet*Vision 3D opened on May 16th, 1991 in what was then Disney-MGM Studios. It was one of the last projects that Jim Henson and Richard Hunt, who played Scooter, Statler, Janice, Beaker, and Sweetums, performed their characters.

Henson died before the project was completed, and Hunt died just one year after.

After Henson’s death, Frank Oz, who played Miss Piggy, Fozzie Bear, Animal, and Sam Eagle, took lead on the construction of Muppet*Vision 3D. He was offered $50,000 but he declined. When asked how Disney could compensate him, he simply requested some socks. When the project was completed, Disney sent him a basket of socks (strange, but true).

The attraction itself has a large queue area where guests can see movie posters, stage doors with humorous job descriptions, and the Muppets preparing their acts. Guests are instructed to take their 3D safety goggles, and Kermit leads guests on a tour of Muppet Studios.

Once inside the showroom, guests can see Muppets practicing their acts attempting to demonstrate their breakthrough 3D film technology. In true Disney fashion, things go awry when Dr. Bunsen Honeydew’s experimental sprite, Waldo, who later disguises himself as Mickey Mouse, causes mayhem in the show. The show uses 3D film technology with 4D effects including audio-animatronics, lighting, projections, smoke bubbles, and even a full-bodied live performer.

This show is hilarious, entertaining, and unique. It is not one to miss on your Hollywood Studios day!

Are you a fan of Muppet*Vision 3D?