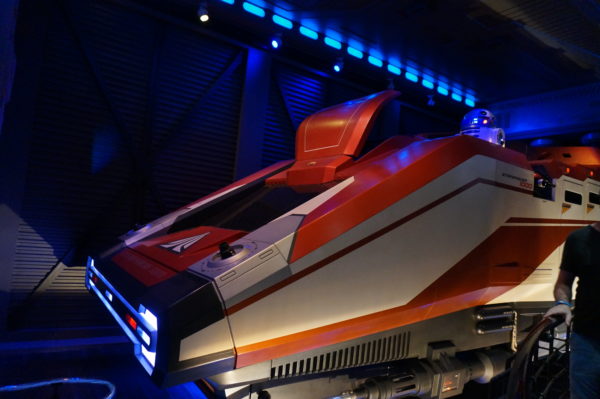 Echo Lake is located in Disney’s Hollywood Studios, which is appropriate because the real-life inspiration is situated near downtown Los Angeles. The building surrounding Echo Lake are inspired by those surrounding the same location in LA including Hollywood & Vine, 50s Prime Time Café, and Dinosaur Gertie.

The original Echo Lake was used as a backdrop for many early films. The same location in Disney’s Hollywood Studios also appears to be used as such.   Indiana Jones Epic Stunt Spectacular! takes place in Epic Theater, which is just a backdrop, and Backlot Express is a storage area for extra props. My favorite attraction in this area, Star Tours, looks like a movie set.

Star Tours has taken many iterations over the years. All of them have been based on the famous Star Wars movies by George Lucas. The attraction first opened in Disney World on December 15th, 1989. That version, while tweaked a little over the years, remained largely the same and closed on September 7th, 2010. The new attraction, Star Tours – The Adventures Continue, opened on May 20th, 2011 and includes locations and characters from all of the movies from Episode I to Episode IX.

Star Tours is a motion simulator attraction that takes guests, “Space Tourists”, on a turbulent trip through the galaxy with the goal of safely returning a spy to the Rebel Alliance with the help of C-3PO and R2-D2.

Before you board the flight simulator, you’ll have to grab your 3D glasses. You’ll also hear C-3PO in a conundrum when he inadvertently gets trapped in the StarSpeeder as he’s doing maintenance.

One reason I love this ride is every time you ride it, it’s a different experience. There are 18 different segments in the four-and-a-half-minute attraction experience all chosen at random with five primary destinations, seven hologram messages, and five ending destinations for a total of 384 different possible ride sequences.

The simulator is also highly technical. The cabin base is manipulated using hydraulic motion with several degrees of freedom including the ability to move 35 degrees on the X-Y-and Z planes. Combine this with all of the possible experience sequences, the audio-animatronics, and the high definition ride video, and this is not a ride you’ll want to miss!