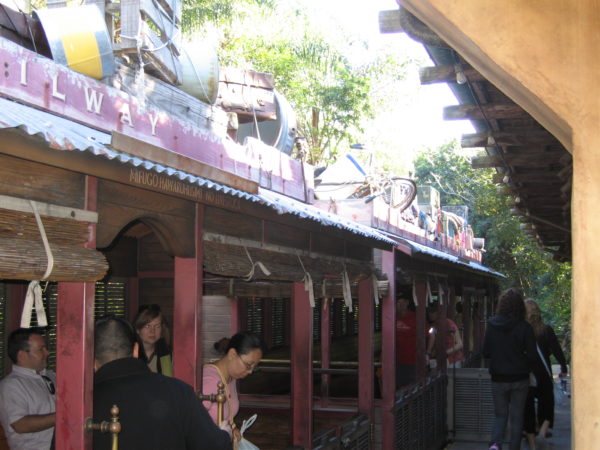 Disney’s Animal Kingdom’s hub is Discovery Island, and every land in the park connects to the hub except one – Rafiki’s Planet Watch.

Habitat Habit! features cotton-top tamarins, and guests can learn about things they can do to protect this endangered species plus how to create animal habitats in and around your own home.

Conservation Station is an indoor exhibit where you can learn about the Disney Conservation Fund and how Disney supports conservation efforts plus see a veterinary exam room. You might even get to see a real animal care procedure! The room is equipped with a two-way communication system so you can ask the vets questions.

Affection Section is an outdoor petting zoo with various domesticated animals. You can pet them, feed them, and observe them. This is a really cool area of this land.

Also at Rafiki’s Planet Watch is the new Animation Experience at Conservation Station. This attraction was formerly at Disney’s Hollywood Studios and DisneyQuest and allows you to take a drawing class with a Disney animator where you learn to draw a Disney character. You can even take your artwork home!

These attractions are lots of fun, but my favorite attraction is found before you even arrive at Rafiki’s Animal Planet. It’s the Wildlife Express Train!

As is true with some other current attractions in Disney World, there was an original plan for Wildlife Express Train that didn’t happen for various reasons. In this case, the train was supposed to travel through the savanna of Kilimanjaro Safaris. However, Imagineers were worried about the safety of the animals specifically but also of the guests.

The Wildlife Express Train is a 3ft narrow gauge rail transport. It is 1.2 miles long, and a round trip is 12 minutes. The trains look old and weathered – like those that travel through Africa, but they were brand new when the attraction opened in 1998. They were built in 1997 by Severn Lamb in Alcester England and represent the fictional Eastern Star Railway from Lusaka to Nairobi to Kisangani.

Along the way, you’ll see part of the Animal Kingdom backlot, which includes animal holding buildings where animals are kept at night and for health care, and the roundhouse where trains are stored but is not opened to the public.

The trains feature sideways benches and have a capacity of 250 people. While the trains can hold this many, it’s rarely ever that crowded. The Wildlife Express Train is a relaxing journey, and Rafiki’s Planet Watch is a great place to visit to get away from the crowds and experience some neat animal encounters!

Are you a fan of Animal Kingdom’s Wildlife Express train?