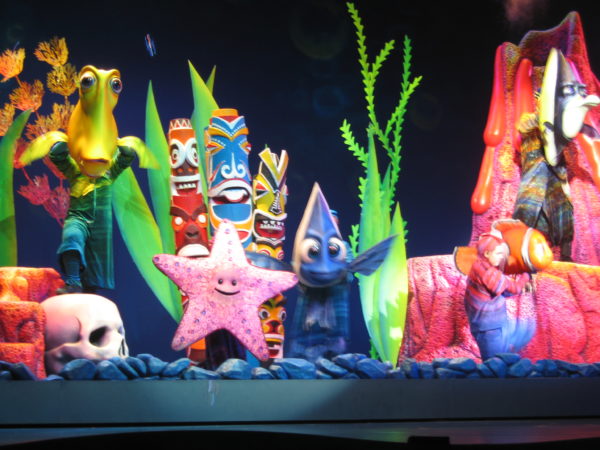 Fish in the aquarium in Finding Nemo the Musical

One of the most overlooked (and even avoided) lands in all of Disney World is DinoLand USA. I contend, though, that it is just as unique and special as all the others if you know the backstory!

DinoLand USA started with the Dino Institute, a fictional paleontological facility, where, as the story goes, students studied dinosaurs. When they made a huge discovery, tourists started to pour in!

Next door to the Dinosaur Institute is the Boneyard, where the students made the big discovery. It has since been turned into a playground for the whole family! Climb the scaffolding to giant slides, rope bridges, and even a Dig Site where you can uncover a Columbian Mammoth fossil!

In response, the students converted their cafeteria into a fast-food facility to cash in on this increased tourism. They named it Restaurantosaurus, and they serve up burgers, chicken, hot dogs, salads, and desserts for lunch and dinner.

In addition to the students who lived in the area, a couple who owned a gas station also saw an opportunity to make money. They opened Chester and Hester’s Dino-Rama, a cheap, roadside carnival complete with attractions, games, and snacks. In this area, you can ride Primeval Whirl, a wild mouse ride, and Triceratop Spin plus play various carnival games and even win prizes.

This is Animal Kingdom, so you can expect to find some animals here including the American Crocodile, Red-Legged Seriemas, Adbim’s Stork, and the Asian Brown Tortoise.

My favorite attraction in this land is Finding Nemo – The Musical!

Finding Nemo – The Musical, located in Theater in the Wild, is my favorite attraction in Dinoland USA!

It has been delighting audiences since January 24th, 2007 as a condensed version of the 2003 Disney*Pixar movie, Finding Nemo performed live with puppets, dancers, acrobats, and animated backdrops. The show is performed five or six times daily; it’s a good idea to get a FastPass+ for the show, but if you can’t, you should arrive 30 minutes early to get at the beginning of the line and secure a good seat in the theater and avoid the massive crowds pouring out of the theater when the previous show lets out.

It really is incredible that a full-length feature film has been condensed to 40 minutes without losing any part of the story, and that is thanks to husband and wife, Robert Lopez and Kristen Anderson-Lopez who composed the music using lines directly from the film and also wrote a new song called Big Blue World. The couple, who also composed music for Frozen and Frozen II, says that Finding Nemo is one of their favorite movies of all time!

The show is directed by Peter Brosius, and the puppets and production are credited to Michael Curry.

While Finding Nemo the movie is not a musical and is the first time Disney has adapted a non-musical movie to become an on-stage musical, it is a spectacular show!