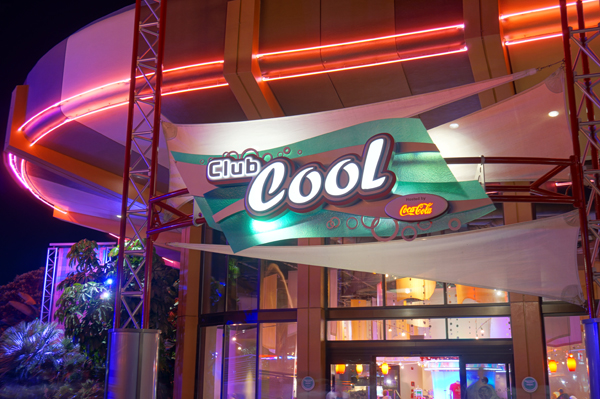 I always talk about how good the food is at Disney World, and I’ll often mention some drinks as a side note, but I don’t usually focus on the drinks in Disney World.

However, Disney World has some great drinks, and many of them are original recipes.

This article isn’t just for the adults, though. While some of the drinks are only available in alcoholic versions, many are available in non-alcoholic forms and some don’t even have adult recipes because they’re great on their own.

Let’s take a look at the top ten drinks in Walt Disney World.

Each of the Disney resort hotels has a pool bar near some or all of the pools. Here you can find a frosty, sweet treat that will keep you cool as you sun bathe. The piña colada is available with or without alcohol, and they’re quite tasty either way.

The Piña CoLAVA is one of the best on property and it can be found at the Petals Pool Bar at Disney’s Pop Century Resort. The Kona Café at Disney’s Polynesian Resort serves up a non-alcoholic piña colada with a pineapple wedge. Even the youngest family members will enjoy this special treat.

In the France Pavilion in World Showcase, you’ll find some of the best adult slushes. They’re made with either Grey Goose or Grand Marnier, both French liquors, and they’re pretty strong. The Grey Goose version is lemon flavored and the Grand Marnier is orange flavored and sweeter.

Disney has an official partnership with Coke, so you can find Coke drinks and merchandise all over Disney World.

One of my favorite beverages is the frozen coke. You can get them at home from fast food restaurants and even your local Target store, but they somehow taste better in Disney World!

You can find them in Epcot Test Track Cool Wash (it looks like a car wash), Club Cool, in Disney’s Hollywood Studios near Hollywood and Vine, in Disney’s Animal Kingdom‘s Dinoland USA, and at the Lunching Pad in Magic Kingdom‘s Tomorrowland, among other places.

LeFou’s Brew is a no sugar added frozen apple juice with a hint of marshmallow syrup topped with mango-passion fruit foam. Many people say it tastes like a caramel apple, and it’s one of Disney’s best signature drinks! If you’d like to try this drink for yourself, you can find it at Gaston’s Tavern in Fantasyland.

LeFou’s Brew is also available in either a souvenir goblet or stein. The price difference is about $8, so it’s an affordable souvenir that you can use every day!

It should come as no surprise that the Mexico pavilion serves up some tasty margaritas. The Margarita Stand outside makes lime, strawberry, and mango margaritas. If you head inside to La Cava del Tequila, you’ll find one of the most unique flavors: the Avocado Margarita.

If you’re thinking, as I first did, that that sounds pretty odd, you couldn’t be more wrong. It is a weird taste, but it’s actually quite good, and it’s a popular signature drink. If you pair it with a guacamole dish, you’ll really taste the Mexican flavors.

Anheuser-Busch makes the Safari Amber Lager especially for Walt Disney World Resort. You won’t find it anywhere else, and it’s even kind of difficult to find on property.

Safari Amber is a red lager with a crisp citrus taste. Even if you’re not a huge fan of beers, you might want to get this one a try. It has a very subtle taste of nut, wheat, and caramel.

You can find Safari Amber at Disney’s Animal Kingdom and at the African Cool Post in World Showcase.

D-Luxe Burger is new to Disney Springs, but they’ve become pretty popular in their short time there. Besides the delicious gourmet burgers, they have an amazing alcoholic gelato drink that combines a cocktail and a milkshake to make something like you’ve never tasted before.

The Conjurita isn’t just another margarita. It is served at the Abracadabar at Disney’s Boardwalk, and it’s as unique and magical as the venue itself.

It’s made with Gran Centenario Plata Tequila, Cointreau, Simple Syrup, and Lime Juice, and it’s poured right in front of you. The magic is that it turns from dark purple to light purple it’s being poured. How? Well, that’s the magic.

The Welsh Dragon is a mix of Peach Schnapps, Melon Liqueur, Crème de Menthe, Orange Juice, and Pineapple Juice served at the Rose & Crown Dining Room and Pub. While it sounds kind of fruity, there’s a reason it’s called “dragon;” it packs quite a punch.

This is another drink that comes in a souvenir cup. The cost of the drink with the cup is reasonable considering that you get to take it home with you. The cup is a tall glass with a handle. On the mug is a British flag and under it the text “Rose & Crown Epcot United Kingdom.”

No drink list would be complete without a mention of the Dole Whip in drink form. The Dole Whip Float puts everyone’s favorite Dole Whip soft serve atop pineapple juice to create a refreshing beverage that will keep you cool even on the hottest days.

This drink is pretty illusive though. You can only get it at a few places including Aloha Isle in Magic Kingdom’s Adventureland, Disney’s Polynesian Resort’s Pineapple Lanai, Tamu Tamu Refreshments in Africa in Disney’s Animal Kingdom, and Frostbite Freddy’s Frozen Freshments at Disney’s Blizzard Beach water park.