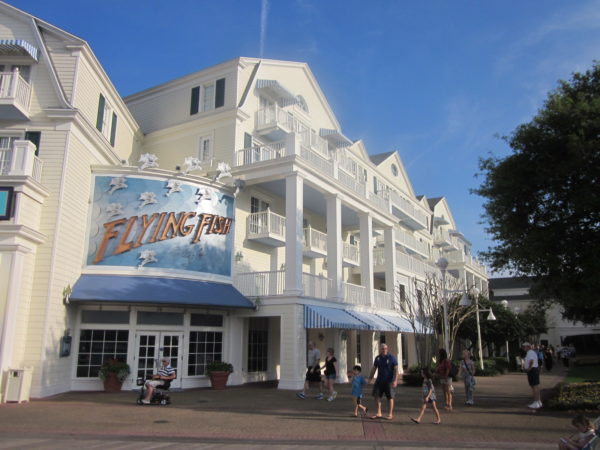 Are you spending Father’s Day, June 16th, in Disney World this year? If so, consider snagging an Advanced Dining Reservation for one of these dining locations that will have special menus or menu items to celebrate the special man in your life!

Let’s take a look at the select Disney World restaurants at Disney World theme parks and Disney resort hotels that will be participating!

In Epcot, treat Dad to a surf and turf prix fixe meal at Coral Reef in Future World’s The Seas with Nemo and friends pavilion. The menu includes a 10-ounce grilled sirloin steak, a grilled shrimp skewer, loaded mashed potatoes, and your choice of appetizer and dessert.

Enjoy your meal as you watch various species of fish including dolphins and sting rays swim by in the second largest aquarium in the world.

Flame Tree Barbecue, one of my favorite restaurants, will serve up Dad’s Platter with brisket, pulled pork, chicken, and ribs. For a little spice, head over to Restaurantosaurus for the Burger and Brew Combo; the burger is a jalapeno popper burger!

Disney’s Boardwalk Inn’s Flying Fish Restaurant and Citricos at Disney’s Grand Floridian Resort and Spa will also have special menus for the day.

Disney Springs will also honor Dads on Father’s Day. House Of Blues Restaurant and Bar will host the Father’s Day Blues and Bourbon Brunch from 10 AM to 1 PM, and Terralina Crafted Italian will feature braised Osso Bucco in a rich, spicy tomato and fennel ragu. STK Orlando will open early (4 PM) for the special day and offer a 16-ounce prime rib, and Frontera Cocina will have drink specials all day including tequila flights, Modelo Especial drafts, and house wines.

Paddlefish’s Father’s Day Cigars, Bourbon and Scotch Tasting is a unique experience for Dad; from noon to 3 PM, Dad can indulge in light bites like charcuterie and artisanal cheeses or the Surf and Turf meal with ribeye steak, a shrimp skewer, béarnaise sauce, and whipped potatoes, and the Bourbon Daddy cocktail made from Medley Bros. Bourbon, apricot liqueur, bitters Orleans, Sprite, and lemon and mint leaf for garnish.

At Morimoto Asia, Dad can try the Orange Gator & Waffle Cone made with tempura sake-marinated alligator in a tangy orange sauce served in a crunchy waffle cone. It pairs well with the local Motorworks Brewing Co Pulp Friction Grapefruit IPA. This item will only be available until September 2nd.

Finally, The Edison crafts some specialty cocktails with dad in mind including “Pa, the Bacon” made with Knob Creek Smoked Maple Bourbon, cinnamon cordial, Woodford Reserve Chocolate Bitters, Woodford Reserve Orange Bitters, and garnished with a slice of candied bacon or “Not your father’s apple pie” with Mellow Corn Whiskey, apple cider, cinnamon cordial, and ground cinnamon for garnish.

Ever take your dad to Disney World for Father’s Day?