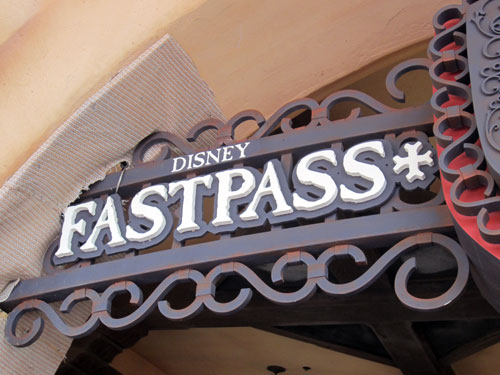 Disney’s virtual queue known as FastPass was first introduced in Disney Parks in 1999. It started with a paper ticketing system that allowed guests to go to a popular attraction, take a ticket, and return at the time specified on the ticket. Upon returning, guests stand in the “FastPass line”, which is much shorter and faster than the standby line.

As of this writing, all of the Disney Parks continue to use the paper ticketing system except our beloved Walt Disney World, which uses FastPass+.

Although the paper ticketing system is fine, it requires guests to be on property and at the attraction to make a reservation. Therefore, your park time is likely spent running from attraction to attraction, criss-crossing the park, to get the coveted FastPasses.

Disney World’s digital system allows guests to make reservations via their personal computer or the MyDisneyExperience app before they even arrive at the resort; guests can also use the kiosks in the parks to make their reservations once they are on property.

When Disney World first launched the FP+ system, guests could make reservations for attractions up to 60 days in advance. You would identify attractions you’d like to visit, and the system would give you groupings of times. Also, you could only make three selections at a time. People complained about losing FP+ reservations they wanted when they tried to change ones they didn’t want.

Shortly after its launch, Disney installed kiosks in the parks to allow guests to make additional FP+ reservations after they’ve used up their initial three selections. What’s more, FP+ reservations could only be made for one park per day regardless of whether you paid extra for the Park Hopper.

But all of that is about to change!

When Disney World first rolled out FP+, some of the features frustrated users. With this update, most of these frustrations will be history! All of these changes were effective on April 10th, 2016, and you’ll notice significant changes to the look and feel of the MyDisneyExperince App as well as the park kiosks.

First, guests no longer have to choose all three FP+ reservations at once. Now you’ll be able to book each attraction individually. You’ll also be able to cancel them individually as well as remove certain guests without affecting your whole group. This means that each person will now be able to make separate reservations. If Dad wants to ride Space Mountain with his teenage daughter while Mom visits the tamer TTA PeopleMover with her toddler-aged son, you can!

Another really nice change is that you’ll be able to better customize your FastPasse+ reservations by choosing specific attractions as well as specific times. Do you want to ride Haunted Mansion first thing in the morning, Space Mountain just before lunch, and Big Thunder Mountain late in the evening? As long as those times are available, you’ll be able to select those times. Therefore, the Quick Picks option will be gone and the system will no longer make selections for you.

I still suggest getting all three of your initial FastPasses in early in the day so you can request your additional FP+ before they all run out!

Next, you no longer have to visit a park kiosk to book additional FastPasses since you’ll now be able to make them on your own through the MyDisneyExperience app after you’ve used up your three initial reservations.  This is a huge benefit since many people spent so much time waiting at the kiosks that they might as well have waited in the queue line!

Finally, and perhaps best of all, you’ll be able to make FP+ reservations for more than one park in a day! If you want to ride Disney’s Hollywood Studios‘ Rock ‘n’ Rollercoaster Starring Aerosmith in the morning then head over to Epcot to ride TestTrack and Spaceship Earth, you can do that now!

FastPass+ park hopping and addition reservations from the app – are you looking forward to the latest FastPass+ changes?