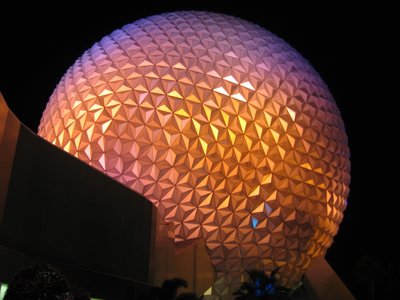 As an icon for a theme park, Spaceship Earth in Epcot‘s Future World stands among the best – right up there with Cinderella Castle in the Magic Kingdom. It is impressive, awe inspiring, unique, instantly recognizable, and truly a feat of design and engineering.

This building that holds Spaceship Earth is unique in many ways. Let’s take a look at some fascinating facts about this amazing building.

Facts About The Building

Spaceship Earth is the world’s largest free-standing sphere. It is 165 feet in diameter and stands 15 feet above the ground. It is 180 feet tall, and like all Disney structures was specifically designed to be less than 200 feet tall so they didn’t need to install legally required aircraft warning lights which would detract from the design.

The surface of the structure is covered by nearly 1,000 panels made from a highly polished form of aluminum which are as smooth as glass. Originally intended to be self cleaning, they are now regularly power washed to keep them clean. Legends that say people have gotten burned from the reflections of these tiles are not true.

The building actually contains two spheres, one inside the other. The inside sphere contains the ride, and an outside sphere sits two feet out from the inside sphere. It acts as a gutter system to collect rain water so that it doesn’t pour down on the people below. The rain water is routed to the nearby World Showcase lagoon.

Only the ride portions of the building are actually air conditioned.

Disney considered several different designs for the Spaceship Earth building, including a Roman building, a dome, and a suspended map. They also considered coloring the sphere gold, similar to a building from the 1967 World Expo in Montreal.

The original mural at the entrance to the building took two months to create by Italian artist Claudio Mozzoli. It is nearly 25 feet long.

Creating this massive building and attraction was quite a job.

The original storyline was developed by Ray Bradbury, the science fiction writer who penned more than two dozen novels, with perhaps the best known being Fahrenheit 451. The story of Spaceship Earth covers 40,000 years of the history of communication in just over 10 minutes.

Disney consulted many experts at Universities and museums to ensure the storytelling was accurate.

The skulls in the pre-historic scene were cast from actual skulls that reside in the Page Museum.

The hieroglyphics in the Egypt scene are true translations of an actual letter from the pharaoh. In the same way, the Latin writing in the Roman scene is accurate.

In the scene with the printing press, Gutenberg is looking at an accurate reproduction of a page from the Gutenberg Bible.

The switchboard in the telephone scene was built from a model of a late 1800s switchboard.

Facts About The Facts

One of my favorite authors on Disney is Jim Korkis. He worked for Disney for many years and rightly considers himself a historian – someone who gathers and preserves information about Disney. Many of the fascinating facts in this article came from Jim (Source).