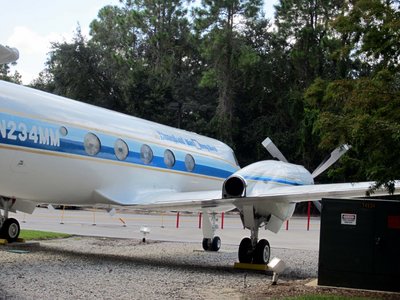 If you have ever taken the Backlot Tour at Disney’s Hollywood Studios, you’ve passed by an airplane parked near the Lights, Motors, Action Stunt Show Stadium. The tram driver (or more recently the recording) explains that the plane, which is now retired, is a piece of Disney history.

The Gulfstream 1 on display was used by executives and Imagineers in the 1960s as they traveled back and forth between Disney’s headquarters in California and the huge construction project at Walt Disney World, and later, Epcot.

Let’s look at six fascinating facts about this plane:

1 – This was not THE plane where Walt made his decision

While Walt did use the plane on display during scouting trips where he looked at land for his new theme park, this was not the specific plane on which he made the final decision to go ahead with the huge land purchase in Central Florida. That plane was another in the Disney fleet, a Beechcraft Queen Air.

2 –Walt liked to be in the cockpit

Even though it frightened the Disney corporate legal team, Walt liked to be in the cockpit. In fact, Jim Korkis (Source) reports that Walt would even control the plane occasionally. He also stated that Walt’s wife, Lillian, was irritated by that.

When Walt used the plane for scout trips, it had the FAA identified number of N732G. The identification number of N234MM was used by all three planes – first Disney’s Queen Air, followed by Disney’s King Air, and finally followed by the Gulfstream which holds the number today. When speaking with the traffic controllers, pilots use the phonetic alphabet – where you speak “November” for the letter “N”, and “Mike” for the letter “M”. Pilots would use the identification of “Metro Metro” at first, but then often followed up by staying “Mickey Mouse” instead. Soon the identifier stuck, and thus the plane was nicknamed “The Mouse”.

Back in the 1960s, the plane now displayed at the Studios earned the distinction of being the most utilized Gulfstream in a corporate fleet. That is because it was constantly shuttling executives and engineers between the California headquarters, the New York World’s Fair site, and the Florida site.

Disney retired the Gulfstream in the 1980s because it became faster to take a commercial flight between California and Florida than it was to fly on the Gulfstream. Disney gutted the interior, so it is unlikely that the airplane affectionately known as The Mouse will take to the skies again.

Do you like seeing Disney’s plane on display in the Studios?