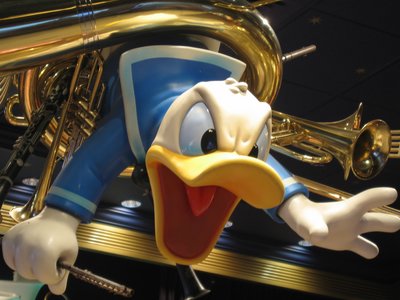 Failure At Disney World – When Things Don’t Go As Planned

When your friends and neighbors wow and amaze your with their tales of family vacations to Disney World, they’re always telling you that they loved this, and couldn’t even believe that, and how utterly marvelous everything was.

No one ever talks about the fact that failure at Disney World does happen. If you asked each and every person who’s ever regaled you with anecdotes about their Walt Disney World vacations if they had ever had something catastrophic happen, each and every one of them would answer with an enthusiastic, “Yes.” Whether little Timmy got the flu at Blizzard Beach or the Jones Family booked an off-site resort hotel that wasn’t all it was cracked up to be, bad vacations happen to good people. This means that a failure at Walt Disney World could happen to you.

Whether it is your first or your fiftieth trip to Walt Disney World, whether you’re there with family, friends, spouses, or strangers, you are never above the possibility of a Walt Disney World disaster. This doesn’t mean that you should live your life in fear of that inevitable moment when you find yourself shaking your Mickey Mouse-eared head and saying, “What have I gotten myself into?” Rather, it means that you should be prepared and have thorough knowledge of how to move past a failure at Walt Disney World.  When your Disney vacation hands you lemons, if you are well prepared, you can make some darn magical Disney lemonade.

What’s the Worst That Could Happen?

So what, you may ask yourself, is the worst thing that could happen in the most magical place on earth? Well, that depends, but after a careful run through of your variables, you’ll start to get the picture. What are these renegade variables that could at any moment shatter the stable foundations of your family Disney World vacation as you know it? Crowds, weather, health, and other are the categories that these variables can be divided into. Each of these elements has a big effect on your vacation.

The Issue:  Dealing with crowds at Disney, or heck, even the Florida airport can sometimes feel like fighting your way through a riot. Everyone is going this way or that, trying to meet their party’s needs with very little consideration for you and what you are trying to accomplish. A crowded day at Disney can be overwhelming. Someone budging in line or being rude to you may be all it takes to put a serious damper on your good cheer. Long lines, crowded restaurants, and busy walkways can keep your vacation party’s stress levels high, and a drop in morale is a serious Disney failure, not to be taken lightly.

What You Can Do:  The good news, in terms of crowds at Walt Disney World, is that everyone is there to have fun with their loved ones. You are surrounded by like-minded folk who don’t want to ruin your vacation anymore than you want to ruin theirs. It is likely, if someone is rude, that a short conversation is all it will take to get them to apologize and make amends for their negative effect on your group’s good mood. Crisis averted. If such a clean conclusion cannot be reached, then talking about it amongst yourselves to blow off some steam may be all it takes to relieve the tension the crowds at Disney World cause. Pretending like the crowds aren’t bugging you won’t be helpful, and nor will complaining endlessly.

The Issue:  It is likely that rain, shine, cold, and blistering heat will all find their way into your weather forecast while you are vacationing at Walt Disney World Resort in Orlando, Florida. Too much of any of these will make it harder to enjoy your vacation, and may flat out discourage the dickens out of you. Maybe you didn’t pack the right clothes for the weather, or it has rained all week when your son really wanted to visit the water parks.

What You Can Do:  If you didn’t pack the right clothes, bite the bullet and buy some. Whether it’s a poncho, a sweatshirt, or galoshes, there will be some available with your favorite Disney character on it. You will not only get the gear you need, but you will have a quality souvenir with a story to take home.  If you don’t want to spend that much money gathering your wardrobe to combat the weather, then you can hop a cab to Wal-Mart off the premises instead. If your son gets pouty about the water parks, let him pick out a new activity to replace the water parks.

The Issue:  Health problems are the most common failure you will hear about Walt Disney World Resort. Someone getting sick, getting a blister, getting heat stroke, forgetting an important medication, and so on.

What You Can Do:  Luckily, you are not vacation on an oil rig in the Pacific, you are, in fact, vacationing in a first world country in a densely populated area that is used to dealing with medical emergencies, and not-so-urgent emergencies. Disney World has numerous first aid stations throughout the parks.  There are plenty of Walgreen’s pharmacies near by. Getting sick at Disney is a bummer, but they have just about the coolest resort hotels to be sick at – Disney movies playing 24/7, plus games and activities in the lobby if you are feeling up to walking around, but not for miles and miles. Little things, like blisters, can be dealt with using proper treatment and bandaging, and maybe taking the bus, rather than walking, from park to park. Medical problems are not the end of the world, or of your vacation.

The Issue:  Of course, there are other things that can ruin your Disney World Vacation. Booking through an unreliable travel agent, for instance, may lead to less than preferable accommodations. Going with a teenager who texts his or her friends rather than enjoying the family trip may lead to fights. Having your wallet or luggage stolen may leave you feeling vulnerable and angry. You don’t have control over all of these variables. Travel is stressful, and failure once in a while is inevitable.

What You Can Do:  When you and your vacation party is struck awed and giddy by Cinderella’s Castle illuminated by fireworks, or taking pictures with the Mouse himself, Mickey, you will find that you’d overcome all of the failure in the world to experience those feelings with the ones you love.

Make your vacation worth the possibility of failure, and overcome it quickly and to the best of your abilities, and you might find that a little failure prevents you from taking for granted the most magical place on earth.