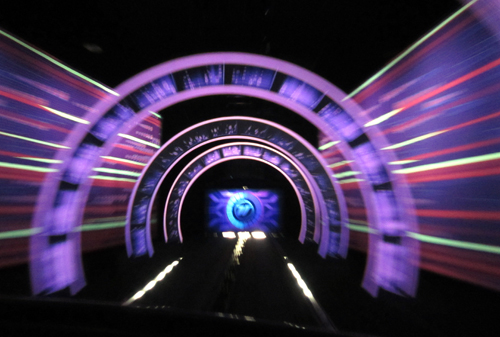 Test Track is a feature ride in Epcot’s Future World that gives guests the opportunity to build a concept car, test the car, then see real Chevrolet vehicles after the ride is over. Test Track is thrilling, and it is a don’t-miss attraction!

World of Motion, sponsored by General Motors, told the story of the history of transportation from pre-historic to modern. This opening day attraction entertained guests from October 1, 1982, to January 2, 1996.

The GM sponsorship expired during a period of recession, and because GM was suffering through lay-offs, budget cuts, and dwindling sales, they questioned whether to continue their relationship with Disney and Test Track.

Eventually the sponsorship continued, but GM requested a ride makeover that would feature their products in hopes that sales would also get a boost. The new ride, called Test Track, officially opened on March 17, 1999, after several delays (more on this later) and a soft opening four months earlier.

The new ride queue shows off Chevrolet concept vehicles, has many branded logos and plaques, and teaches guests about car design. Guests even get the opportunity to create their own concept car. After the ride, guests can check out new Chevy vehicles with knowledgeable sales people who can even send vehicle information directly to your home address. Young car enthusiasts (and those who are young at heart) will find simulators, games, and photo backdrops to further test and redesign their concept car.

4. The story is woven throughout the ride.

Disney is all about creating a story not only within the ride but within the land as a whole. Future World immerses guests in an environment where anything is possible. The future is full of potential, and in Epcot’s Future World, you can see it for yourself.

Within Test Track, the concept vehicles show guests what cars might look like in the future including cars that drive themselves via GPS tracking. When guests design their own concept car, they can choose from a huge vehicle that will crawl over any obstacle, one that goes really fast with a supercharger, one that is as efficient as Chevy’s real futuristic car, the Volt, or anything in between.

As you board the ride, touch your MagicBand to the glowing Mickey Post to see how your concept car performs. With you as a passenger, your car will go through a series of on-road testing including a hill climb, suspension, braking, environmental, handling, barrier, and high speed. At the end of each section, look to the lighted board in front of you to see how your car performed on that test. There is also a summary of your car’s performance at the end of the ride.

3. The ride vehicle is complex.

As I mentioned earlier, there were many delays involved in opening Test Track, and these were mostly due to the ride vehicle, which is considered the most complicated in Walt Disney World. Imagineers encountered problems ranging from weak wheels to a ride system that couldn’t hold enough vehicles at once. After programming each individual car, which has an onboard computer with three times the processing capability of a space shuttle, they were able to accommodate the necessary 29 ride vehicles.

Unlike real, on-road cars, Test Track cars are made of composite materials and no steel. This allows the 250 horsepower cars to travel at 65 miles per hour with a 0-65mph acceleration in just 8.8 seconds making this the fastest ride in Walt Disney World.

Each car can hold up to 6 guests as a time, travels on 22 wheels, and has six braking systems. The cars are designed to last for one million miles and travel about 50,000 miles per year. Backstage, there is a real garage with mechanics, tools, and lifts to service each vehicle regularly.

2. The track is sophisticated.

The track itself is just shy of one mile in length at 5,246 feet with 2600 feet being outdoors, and it takes about 5 ½ minutes to travel through the ride’s simulated tests. Although this ride actually travels at 65 miles per hour, the design of the track gives guests the feeling of travelling at 90 miles per hour because of the 50-degree angle of the outside track.

Because this ride could be dangerous with the abrupt starts, stops, and accelerations, each part of the track is serviced frequently to ensure safety.

1. There are many ways to ride.

Test Track has the only Single-rider line in Epcot, and you will benefit greatly by using it. If you want to cut your wait time, the Single-rider line is a great option. Even if you’re with a group of people, it’s likely that you’ll ride in the same car with at least one other person in your group. The only problem with this option is that you will experience an abbreviated design experience.

This is also a Tier 1 FP+ attraction along with Soarin’. I do not recommend using your valuable FastPass for Test Track, though. Instead, get to Epcot early and ride Test Track first thing in the morning. Since part of the track it outdoors, this ride closes for inclement weather, which usually happens in the afternoon hours. What’s more, FP+ riders also have an abbreviated design experience, so riding early when the Stand-by line is relatively short will give you the full experience with a short wait time.

Finally, if you have a Disney Fan in your group shorter than 40 inches but still want to ride Test Track, considering using the Child Swap line. Parents wait in line together, one adult rides while the other waits with the child, and then they swap without having to wait in line again. This means you can wait in the Stand-by line to get the full design experience, even allowing your little one to help create the car, test your concept car individually, then use the simulators and games at the end of the attraction.

Are you a Test Track fan?