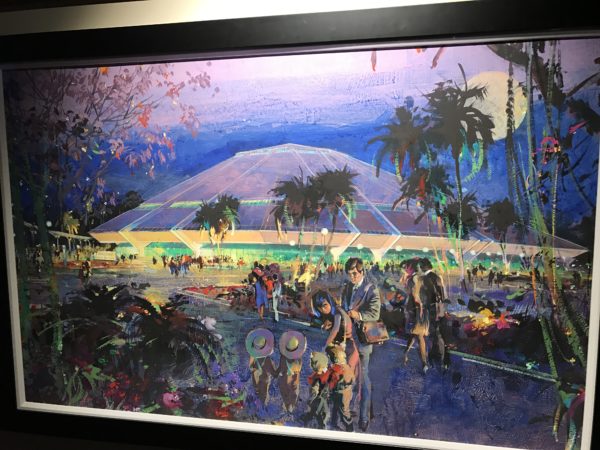 Disney is in a constant state of change, which is exactly how Walt intended it. He said that Disney[land] will continue to change as long as there is imagination in the world. Popular attractions have come and gone in Disney World, and there are some that we miss more than others.

Today, we’re going to take a look at twelve things we miss in Disney World!

The Davy Crockett Explorer Canoes were part of Magic Kingdom’s opening day lineup. Unlike many attractions, they were free floating rather than on a track. The 35-foot canoes were guided by two Frontiersmen who gave a lesson on paddling while circling Tom Sawyer Island. They also pointed out sights along the way!

The Walt Disney World Skyway was a one-way transportation system inside Magic Kingdom from Fantasyland to Tomorrowland. This bucket ski lift-style attraction was very popular for more than twenty years, but it closed in 1999 after safety concerns due to stress cracks in the metal.

A similar but updated system is currently being built in Disney World, but it will connect parks and resorts instead of lands within a park. This will take some load off of the Disney buses and provide much needed extra transportation to some very popular resorts including Disney’s Pop Century Resort and Disney’s Caribbean Beach Resort to Epcot and Disney’s Hollywood Studios.

20,000 Leagues Under the Sea delighted guests from 1971 to 1994 as a partially submerged submarine ride. There were a couple show pavilions and various experiences throughout the ride that made it fun. Unfortunately, due to high maintenance costs and low capacity, the attraction was no longer sustainable. The attraction closed in 1994 and the area sat vacant until Seven Dwarfs Mine Train took its place as part of the New Fantasyland expansion.

Mr. Toad’s Wild Ride took guests on an erratic ride through the streets of London in a 1930s miniature motorcar. Riders experienced different calamities along the way and ended with a fateful crash with a locomotive. The attraction closed in 1998 and was later replaced with The Many Adventures of Winnie the Pooh.

The attraction, based on The Wind in the Willows, became outdated, though it had a huge fan base. Winnie the Pooh is definitely a more contemporary draw for kids, the primary audience for Magic Kingdom.  Still, Mr. Toad holds a place in the hearts of many Disney fans.

World of Motion was a popular opening day pavilion at Epcot. It fulfilled the transportation part of the park’s mission and tracked the progression of transportation from the invention of the wheel to present-day and into the future. The attraction was a classic Disney dark ride and was pretty entertaining – especially when it came to the chaotic scene of a traffic jam. It closed in 1996 and was replaced by Test Track in 1999.

Horizons was nearby, and this pavilion had a futuristic vision. The OMNIMAX screen and realistic animatronic figures showed what life might be like in future cities, deserts, under the sea, and in space. It was imaginative but seemed to somehow have a feeling of actuality. It was education and entertaining.  It also had some of Disney’s first interactivity, allowing you to select your own end scene.

Horizons was replaced by Mission Space in 2003, which mow takes riders on a Mission to Mars!

Mike Fink Keelboats is the last opening day attraction on our list. There were two boats that looked like boats from the Davy Crockett and Daniel Boone era: The Gullywhumper (I love that name!) and The Bertha Mae. Like the Davy Crockett Canoes, they were also free floating around Tom Sawyer Island on the Rivers of America. The attraction closed in both Disneyland and Disney World after a boat capsized in 1997 injuring some guests.

Discovery Island opened a few short years after Magic Kingdom debuted as Treasure Island and was only accessible by boat. It is situated on Bay Lake near Disney’s Fort Wilderness Resort. The island was almost like an early version of Animal Kingdom where you could observe wildlife in their natural habitat like lemurs, Galapagos turtles, exotic birds, and more. There were also Cast Members available to answer questions. It closed in 1999, just one year after Animal Kingdom opened, and the animals were sent to Disney’s Animal Kingdom.

River Country, which opened in 1976, was Disney World’s first water park. It was located near Discovery Island and it actually used water from Bay Lake. This water contributed to the feel of an old swimming hole, but it also led to the ultimate closure. The lake water was filtered, but it still had dangerous amoeba. The park was also in a remote location at the back of Fort Wilderness.

There was an area called Slippery Slides Falls with chlorinated water, but it wasn’t enough to sustain the small park after Typhoon Lagoon and Blizzard Beach opened with much more impressive attractions.  River Country didn’t make sense as time went on.  Disney they closed the park in 2001.

When Epcot’s World Showcase opened in 1982, there were old-fashioned double decker buses that picked guests up and took them to different spots around the 1.3 mile loop. They were a nice alternative to walking, but unfortunately they also impeded pedestrian traffic. Disney removed the buses from World Showcase, but they’re still used for characters in parades and in-park ceremonies.

Mickey’s Toontown Fair opened in 1988 as Mickey’s Birthdayland. The name changed two more times throughout its lifespan. It was a really cool little land and included Mickey and Minnie’s houses plus some other cool areas that made it seem like you stepped right into a cartoon. The land closed in 2011 as part of the New Fantasyland expansion. Today, Dumbo’s Storybook Circus stands on that area.

Push the Talking Trashcan was a cute, remote controlled talking trashcan in Magic Kingdom’s Tomorrowland. He showed up every afternoon just before the 3 o’clock parade, and his interaction with guests was entertaining. He first arrived in 1995 and visited until 2014. Despite a social media campaign to keep it, Disney removed Push from the park.

Which extinct attraction do you miss the most in Disney World?