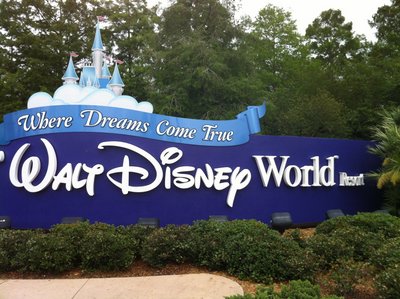 Express Yourself with Disney Typography

However, that wasn’t enough for one creative and talented Disney fan.

Florida native Justin Callaghan has made it possible for fellow Disney fans to express themselves in writing in unmistakable Disney style. Callaghan is a graphic designer and typographer who has created a series of fonts inspired by the Walt Disney logo as well as classic signage from around Disney World.

Callaghan first dipped his toes into the waters of typescript design when he was a student in college. Disney fans large and small were eager for a font that emulated the distinctive script from the Walt Disney logo, which was itself inspired – albeit loosely – by Walt Disney’s own signature. Unfortunately, no such font existed at that time since Disney itself had only ever created the ten letters that appear in the logo. Callaghan set about creating a typescript to fill the void. This script gradually developed from a primitive early form called “Walt Disney Script” into an accomplished font now known as “Waltograph”.

From that starting point, Callaghan has gone on to create six additional Disney-inspired fonts. Drawing research from around the Walt Disney World theme parks, Callaghan was inspired to create fonts that reflect typefaces on signs and icons throughout the parks. He hoped to produce typescripts that instantly evoked the bold, larger-than-life imagery and detail of Disney’s worlds.

“Space Age”, which Callaghan describes as a “techno font”, was inspired by the Mission: SPACE attraction at Epcot. “Ravenscroft” developed from the Victorian-style lettering seen at Magic Kingdom’s Haunted Mansion attraction, and takes its name from a famous Disney voice actor. Alien Encounter, a former attraction in Magic Kingdom’s Tomorrowland, may have passed into oblivion, but the alien-esque lettering from its logo lives on in the “Seized” font. “Prototype” and “Bradley Gratis” reflect signs seen around Epcot’s Future World and Magic Kingdom’s Adventureland and Fantasyland, while “Florida Project” translates Disney World’s original logotype, with a somewhat funky 1970s look, into font form.

Presently, Callaghan is working on a new typescript inspired by the official logo of Disneyland in Anaheim. He hopes that this blackletter font can one day perfectly capture the spirit of Disneyland and Fantasyland. In addition to the logo, Callaghan is also using credit sequences from classic Disney films as inspiration for the new type face. Credits for films such as “Sleeping Beauty” were hand-lettered, and Callaghan hopes to imbue the font with a similar air of hand-drawn craftsmanship.

Get The Disney Fonts For Yourself

All of the designer’s Disney fonts are free for non-commercial use at Callaghan’s website, www.mickeyavenue.com. These days, his fonts can be spotted on everything from wedding and birthday invitations to technology company logos. Many Disney related websites use the fonts to add a special Disney feel to their material. Callaghan has even spotted (and photographed) his fonts being used on official signs and messages around Disney World.