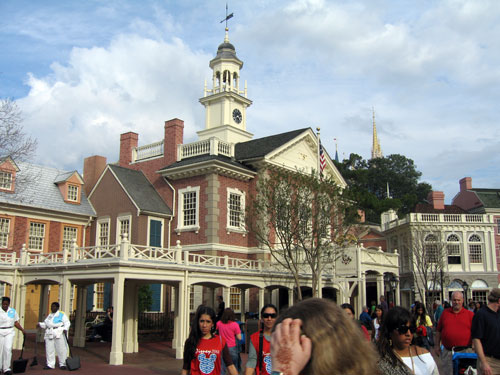 Fun Details You May Have Never Noticed in Walt Disney World

Walt Disney World is all about immersion and placing guests in a totally different time and place. From the theater-inspired entrance of the Magic Kingdom to the intricately themed lands of all four parks, Disney’s Imagineers have done an amazing job in truly setting the stages for the adventures of their park-goers.

Sometimes these details are very obvious and stand out, very plainly telling a story, but sometimes you have to do a little bit of investigating to find out the stories behind the small details that make Walt Disney World so great and unique.

Here are a few fun details you may have never noticed at Disney World:

You may have noticed while walking through the amazingly detailed Liberty Square in the Magic Kingdom that there is a brown path that winds throughout the land on the ground. There is a very distinct reason for this change in the terrain. Back in Colonial times, there were no sewers (or indoor plumbing or toilets). So what did the citizens of busy towns and cities do with their, um, sewage? Threw it right out the second story window into the street, of course! That is what the brown pathway represents. Great detail, even if it is a little on the gross side!

Bugs Lighting Up the Signs

It’s Tough To Be A Bug, the 3D show inside the Tree of Life in Disney’s Animal Kingdom, has been delighting guests since the park first opened in 1998. The Tree itself is full of fun little details but I wanted to point out one in particular that I hadn’t noticed until recently (and I even used to work in that park!)

Toward the end of the show, an announcement is made over the PA system in the theater. The announcer says “will all honorary bugs remain seated while all the lice, bed bugs, maggots and cockroaches exit first.” Right after that announcement, look immediately to your left. The EXIT signs appear to be being lit up by fireflies leaving the theater!

When Walt Disney arrived in Los Angeles, as the legend goes, he had a cardboard suitcase and only forty dollars in his pocket. His first “workspace” was in his uncle’s garage on Kingswell Avenue, but he and his brother Roy realized they needed an office space for them to work out of. They couldn’t afford much, so they rented a single room at Holly-Vermont Realty for $10 per month. It was in this room where “The Alice Comedies” were first created, giving the Disney Brothers Cartoon Studio it’s first big break. The brothers would soon outgrow the space and move to a larger office, but if it weren’t for Holly-Vermont Realty and it’s inexpensive rent, who knows which direction the company would have gone in?

When Disney Imagineers came up with the idea and the placement of The Twilight Zone Tower of Terror, they ran into an interesting problem. The attraction, at 199 feet tall, would be visible from Epcot, specifically from the Morocco Pavilion in World Showcase. So what did the Imagineers do? They designed the outside of the Tower of Terror to blend right into the look and feel of the Morocco Pavilion, while still maintaining the look and feel of an old, abandoned hotel from Hollywood’s heyday. As a matter of fact, you’ve probably looked right at the Tower from Morocco and never even noticed it was there!

When Dinoland first opened in Disney’s Animal Kingdom, the main sponsor of the land was the ever-popular fast food chain, McDonald’s. McDonald’s food items were available for purchase in the land as well as in several other locations throughout Walt Disney World. Admittedly, that’s not a very fun detail! But here’s the fun part: in the queue for Dinosaur (previously named Countdown to Extinction), near the load area, look for the red, white, and yellow pipes that are over your head. Each one of the pipes has a chemical name printed on them. These chemical names are actually the chemical compounds for ketchup, mayonnaise, and mustard (hence the red, white, and yellow) and were never removed once the sponsorship from McDonald’s ended!

When it comes to Walt Disney World, literally everything has a story and every sign, every walkway, and every building is designed to help tell that story. I often find myself running through the parks to get to my next FastPass or dining reservation and missing out on a lot of these fun little details that make the stories complete.

The next time you’re in Walt Disney World, slow down a little bit. Take some time to walk around, notice things, and try to figure out some of the stories on your own!

Do you take time to enjoy the details at Disney World?