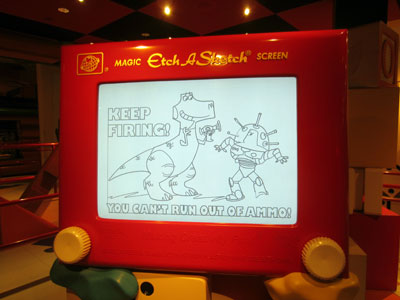 It is always fun when Disney Imagineers “plus” an attraction by changing, adjusting, or adding something new.

That happened recently in the ever-popular Toy Story Midway Mania Queue in the Pixar Place section of Disney’s Hollywood Studios.

Since you have entered Andy’s room as the size of a toy, the Etch-A-Sketch appears to mere humans to be huge. It is perhaps five feet tall.

The toy sketches out quick puzzles and questions about the Toy Story movies. It’s a fun addition to a queue, which can often last more than an hour.

Disney has added new elements to attraction queues over the past few years, including the interactive graveyard at the Haunted Mansion, interactive mining-themed elements at Big Thunder Mountain Railroad, and the play area in the new Dumbo ride. It seems Disney wants to provide more diversions, games, and interactive elements to make waiting in line less of a drag. I think that is a good thing.

Today this new prop seems to rotate through the same set of information and games. However, since these queue elements are basically a huge computer-controlled monitor, it doesn’t seem like it would be too difficult for Disney to change the content, or even make it interactive, and tie it into Disney’s MyMagic+ initiative. Wouldn’t it be fun if the Etch-a-Sketch knew it was your birthday as you walked by and sketched out a personalized birthday greeting?

Since Toy Story Midway Mania regularly has a 70-minute standby wait even when the park isn’t crowded, it makes sense that Disney added the Etch-A-Sketch to keep people occupied during their long wait in line. It’s a fun addition, although not quite as dramatic or fun as the Mr. Potato Head that Disney installed when the ride first opened.

While I love this addition, I have to wonder if Disney is adding it now because they expect that the standby waits will grow even longer when more people can use MyMagic+ and FastPass+ to schedule this popular attraction in advance. If more of this ride’s capacity is allocated to MyMagic+ and FastPass+ than is currently allocated to the old fashioned FastPass, then the standby wait will inevitable grow even longer. All the tired, huddled masses shuffling through the well-beyond-an-hour wait will welcome a few more diversions.

Do You Like The New Etch-A-Sketch In The Toy Story Mania Queue?