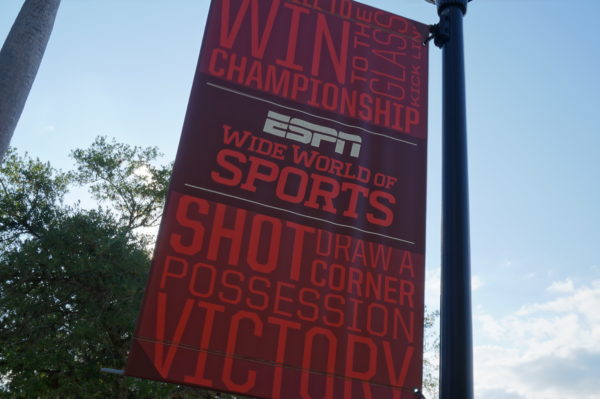 eSports May be Coming to Disney World

Disney announced last year that they would be expanding their ESPN Wide World Of Sports complex with a completion date set for 2018.

The new 300,000 square foot area will hold 8,000 spectators, and it was originally intended for cheer and dance competitions, which is big business for Disney World.

The complex sits on 220 acres and holds 10 tennis courts, an 11,500-person ballpark, and a track and field arena. For 20 years, ESPN Wide World of Sports has been hosting sports competitions and welcoming sports fans of all kinds.

Now, Disney is considering bringing another sport into the mix: eSports.

eSports has been around since the early 1970s, but it really started gaining momentum in the early 2000s when South Koreans became more interested in computer and video gaming. Less than a decade later, the number of eSports competitions every year increased over 200 fold.

It has been debated whether eSports is actually a sport since there isn’t much physical athleticism involved, but there is a lot of mental stamina required. What’s more, eSports competitors do get paid and they have sponsorships just like more traditional athletes. If ESPN Wide World of Sports and even more so ESPN itself, is going to keep up with the current trends they need to add eSports to their portfolio.

Not The First – For Disney Or Others

This isn’t Disney’s first experience with eSports though. They’ve recently aired some eSports events on Disney XD, most recently the 2017 Finals for the Evolution Championship Series. Perhaps in the future, they will not only air but also host and televise these competitions.

Disney also isn’t the only large corporation looking into sponsoring eSports teams. Others include Google, Amazon, Twitter, and Facebook. This growing industry is worth well over several billions of dollars, and prize pools for competition winners can be over $20 million dollars with just as many people watching from around the world.

Disney has a lot to gain from hosting these competitions just as they do with other sports. Players, families, and fans come from all over to attend the competition, and they will spend money on lodging in the Disney resort hotels, park tickets, dining, and more.

Would you attend an eSports competition in Disney World?