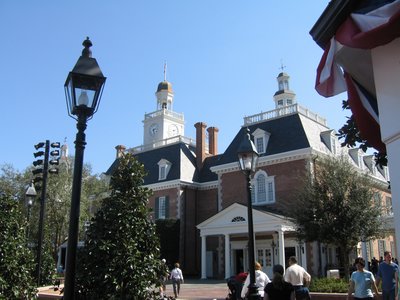 The Epcot United States Pavilion sits at the apex of the World Showcase Lagoon. This pavilion dedicated to the United States of America was one of nine country pavilions present on Epcot’s opening day in 1982. The host pavilion of the World Showcase, the Adventure consists of one large and beautiful building in the style of a Colonial mansion and a courtyard bedecked in patriotic colors.

The American Adventure sits directly across from the America Gardens Theatre, an outdoor venue that hosts different musical acts and live performances throughout the year. The name of the pavilion is also the name of its main attraction: a 30-minute theatrical show celebrating great moments and historical figures in American history.

The American Adventure pavilion also features a courtyard with twin gazebos and a pond in the center. Cast members and pavilion alike are dresses in patriotic colors throughout the year, giving the pavilion the festive appearance of a Colonial town on the 4th of July.

The Design and Exhibits

The distinctive Colonial edifice of the American Adventure is not a replica of a single Colonial-era building, but takes elements and inspiration from Philadelphia’s Independence Hall and Boston’s Old State Hall, as well as the Colonial town of Williamsburg and Monticello, the home of Thomas Jefferson. In the pursuit of authenticity, the thousands of bricks used for the building are all made from Georgia red clay that was specially aged and tinted for the construction.

Inside the building visitors will find a beautiful white rotunda decorated with quotes from notable American politicians, writers, innovators, and other public figures. Visitors can seek inspiration from the words of Charles Lindbergh, Herman Melville, or Walt Disney himself. Numerous paintings also decorate the walls and depict scenes from the birth and development of the Unites States.

Inside and out, patriotism is the overriding theme at the American Adventure. Bunting and flowers in patriotic colors decorate the grounds and the outside of the Colonial mansion, while inside guests may visit the Hall of Flags, where American flags from throughout the country’s history are displayed. Roses feature prominently in the gardens of the pavilion, and each variety present takes its name from a US president.

The American Adventure is the main attraction at this pavilion. The 30-minute show features a host of audio-animatronic characters re-enacting great periods in American history, and as well as video projections on the large rear screen of the theatre.

Inside the large theatre are 12 illuminated statues, 6 on either side of the stage, that personify a variety of American ideals. These statues represent the Spirit of Individualism, Innovation, Freedom, Heritage, Independence, Compassion, Discovery, Pioneering, Self-reliance, Adventure, Knowledge, and Tomorrow.

The experience is “hosted” by animatronic figures representing Benjamin Franklin and Mark Twain. Their conversation guides attendees through the major events featured in the remainder of the show. As the American Adventure progresses, guests meet an additional 33 audio-animatronic characters ranging from Thomas Jefferson to Susan B. Anthony, Theodore Roosevelt to Thomas Edison.

The animatronic and film stories begin with the American Revolution and continue past the turn of the 21st century. The show was thoroughly updated in the 1990s to include all-new animatronics, and additional footage has also been added the final video montage to celebrate more recent events in United States’ history.

Like the rest of the American Adventure pavilion, the theatre is wheelchair accessible Assisted listening devices or reflective captioning stands are available for hearing impaired or deaf guests to use.

Heritage Manor Gifts is the lone gift shop at the American Adventure, featuring a limited range of patriotic and faux historical items. Compared to the foreign luxury items available at the other World Showcase pavilions, the items available at Heritage Manor Gifts are fairly run of the mill – similar to what can be found at Disney gift shops all around Walt Disney World. However, there are a few fun items to be found such as replicas of the Declaration of Independence.

The American Experience is also very simple in terms of the dining options that are available. The Liberty Inn Restaurant is a quick counter-service restaurant that serves typically “American” items such as hamburgers and hot dogs. Dessert is good old American apple pie with ice cream on top. The pavilion also has a funnel cake stand outside where guests can go for a quick, sweet snack.

It’s plain fare compared to the more exotic cuisine available at many of the other pavilions, but that simplicity may be a boon to picky eaters, especially children, who are not excited by the array of unfamiliar food at the World Showcase.

Other Entertainment at the American Adventure

One highlight of the American Adventure pavilion is the Voices of Liberty, an 8-member a cappella group that specializes in American classic songs. Performances take place in the rotunda, taking advantage of the Soaring acoustics this area offers.

The members of the Voices of Liberty wear Colonial dress while performing up beat crowd favorites like “Yankee Doodle” and moving pieces such as “Ol’ Man River”. The group can be seen several times throughout the day, so visitors should check the Epcot Times Guide in order to catch a performance.

Listen to the Voice of Liberty sing “God Bless America.”

The Spirit of America Fife and Drum Corps is another live performance group that will take you back to the years of the American Revolution. This group performs in the courtyard in front of the Colonial mansion, and can also be seen several times daily. The group consists of two drummers, two fife players, and a standard bearer, all dressed in Colonial military uniforms. They create marching formations while playing rousing marching tunes such as “Yankee Doodle Dandy” and “God Bless America”.

The adjacent America Gardens Theatre is also a destination for great live performances throughout the year. It hosts a concert series during the yearly Epcot Flower & Garden Festival and International Food & Wine Festival, the beautiful Candlelight Processional during the Holidays Around the World Celebration, and many other independent performances.