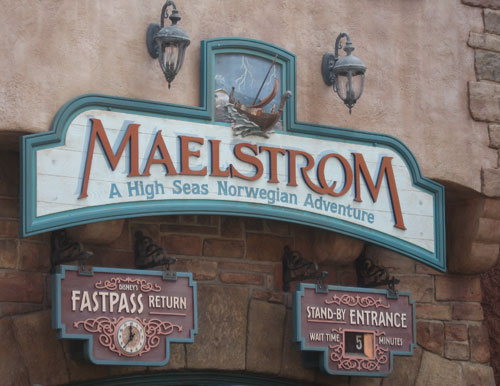 The power of Disney’s “Frozen” is amazing. The two sisters have been able to topple trolls, a polar bear, and even an off-shore oil platform.

After 26 years, Disney will close the Maelstrom attraction in the Norway pavilion of Epcot‘s World Showcase. The slow moving boat ride took guests past many iconic scenes of real and mythical life in Norway and included (wait for it) trolls, a polar bear, and an off-shore oil platform.

The last day for the Maelstrom attraction is October 5, 2014. The new attraction is tentatively scheduled to open in early 2016. Disney has not yet announced a specific opening date.

The new “Frozen” attraction will transport guests to the mythical (and assumedly Norwegian) city of Arendelle where they will be able to see many scenes and hear much music from the run-away hit film.

In addition, Disney will open a character meet-and-greet where guests will be able to see Anna and Elsa in person. Disney originally put an Anna and Elsa character greeting location in the Epcot Norway pavilion. People waited in lines as long as five hours to meet the queen and her sister. In response, Disney moved Anna and Elsa to the Magic Kingdom Princess Fairytale Hall. It is still difficult to see the characters as FastPass+ reservations tend to run out minutes after they become available. Assuming Disney will not allow characters to be in two places at once, it now seems the sisters will travel full circle and return to Epcot.

There is no word on whether Disney will remove or update the old film at the end of the Norway attraction, although it seems likely that the current film will go.

The film still shows Norwegians working on hulking mainframe terminals and stuck in some regrettable fashion trends that were popular when the film was originally created back in the 1980s. The film created something of a controversy. A Norwegian language web post calls the current film an “embarrassing advertisement” for Norway.

Disney seemed unwilling to update the film since there was no sponsor to pay for the work.

Even so, a while back some reports surfaced that a Norway marketing group called “Innovasjon Norge” was so embarrassed by the old Epcot film that they created a new, updated film and offered to give it to Disney. Disney said the film didn’t meet their quality standards.

Frozen Christmas at the Magic Kingdom

Disney made a second announcement about the “Frozen” impact in Disney World. In a post on the Disney blog by executive Tom Staggs, Disney announced that “Frozen” characters will also make some new appearances in the Magic Kingdom this Christmas.

In addition, Anna, Elsa, Olaf, and Kristoff will appear in the Magic Kingdom Christmas parade.

Will you miss Maelstrom in Epcot after Disney replaces it with “Frozen”?