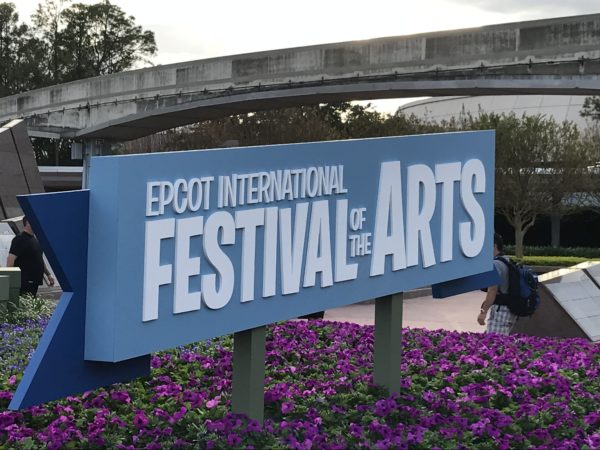 Epcot International Festival of the Arts Returns in 2019

Epcot launched their International Festival of the Arts in 2017, and it’s grown every year since. This year, the visual, culinary, and performing arts offerings are expanding again!

Let’s take a look at what you can see in the 2019 festival, which will begin January 18th and run through February 25th!

The big news this year is that the Disney on Broadway Concert series will run seven days a week throughout the festival!

Every day at 5:30pm, 6:45pm, and 8pm, two performers will take the stage at American Gardens Theater in The American Adventure Pavilion of World Showcase to sing favorite songs from Disney’s best Broadway productions.

The lineup will rotate among the following performing artists:

This very special event is included with your park admission, but if you want to guarantee yourself a seat in the theatre, you can book the Disney on Broadway Concert Series Dining Package at Epcot’s participating restaurants, which will be announced soon. Advanced Dining Reservations for this package open on November 8th 2018.

Besides the Disney on Broadway concerts, there are other performing artists like acrobats and Bodh-aktan in Canada and Delta Q in Germany.

This year there will be even more artwork for sale in Festival Markets and Art of Disney. You’ll also be able to see art on display like a giant wall mural along World Showcase Plaza and famous Disney artists’ artwork on display throughout the park.

There will even be some experiential art available like the opportunity to step inside works of art, take fun photos or a scavenger hunt with Figment, complimentary 30 minute informative sessions about how to produce artwork at home, or artist meet and greets!

While there are many free opportunities, there are also some workshops that you can pay extra for like Paint with a Disney Artist, which you can do on Fridays and Sundays and includes a continental breakfast. There are also workshops led by professionals who teach techniques for floral design, ink and paint, mixed media, and more. These classes take place Friday through Monday, and what you create you can take home with you!

If you want some special merchandise to commemorate your day, stop by Mouse Gear where you can find souvenirs with the festival logo like clothing, mugs, totes and more!

Will you be visiting the Epcot Festival of Arts in 2019?