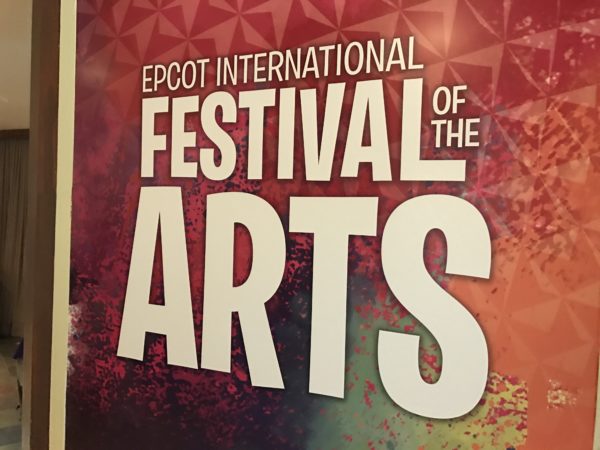 Earlier this year, Disney debuted a brand new festival dubbed the Epcot International Festival of the Arts. The 2017 installment took place only on the weekends, but it did a pretty good job at honoring culinary, visual, and performing arts – and also giving folks a new reason to visit the park.

This “Festival of the Arts” is the third festival to take place throughout the year at Epcot, joining the ranks of the well established International Food and Wine Festival and International Flower and Garden Festival.

The Festival of the Arts brings something new experiences – art exhibits from Disney legends and stage performances from Broadway singers.

Just weeks after the 2017 festival ended, Disney said that it would return next year, but they didn’t announce any dates.

In 2018, the Festival of the Arts will begin on January 12th and take place every day until February 19th.  This is by far the shortest of the three Epcot festivals, but that doesn’t mean that it’s any lower quality. In fact, it’s almost doubled it’s length from last year going from 20 days to 39 days.

Also, last year, the festival only took place on weekends.  This year it will take place every day.

In 2018 you can expect more activities, more exhibits, more art-inspired cuisine, and more Broadway concerts. There will also be seminars and hands-on workshops with art professionals. While most events will be available every day, but special entertainment will be scheduled each weekend.

2018 Epcot International Festival of the Arts: Will you go?