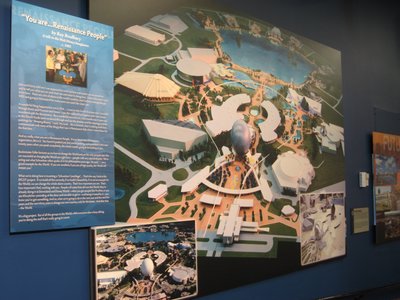 If you’ve been wondering what to buy me for my birthday, or Father’s Day, or Christmas – well, I might just have your answer.

On October 1, 2012 Epcot – the groundbreaking theme park that celebrates the future and the cultures of the world – will turn 30 years old. D23: The Official Disney Fan Club has announced details for the celebration.

D23 will be providing a detailed look at the creation and changes of Epcot through a series of exclusive presentations and displays. There will be two levels of admission for the event: the World Passport level and World Key level.

Hooray for the 21st Century

Most of you reading this already know that Walt’s original vision for Epcot was not that of a theme park but instead of a working city that would be a model for urban planning. Marty Sklar, a Disney Legend and former Imagineer, will deliver a virtual presentation and talk about what it was like to work with Walt Disney himself on the original vision for Epcot. He will also share memories from the development of Epcot.

Perhaps more than any other parks in the world, Disney Parks and especially Epcot are known for their music. Famous composers and songwriters like Robert Sherman, X. Atencio, and Bob Moline contributed to the soundtrack for the attractions and shows. This presentation promises to share information on the development and even alternative songs that went into making Epcot.

We Can Do It

The people who created Epcot talk about the huge challenge the tacked in creating the park, which at the time of its building was one of the largest privately financed constructions projects ever.

Ron Logan, a Disney Legend who worked in the Entertainment division on everything from marching bands to Broadway-styled musicals, discusses what it was like to stage the most elaborate opening ceremonies Disney had ever attempted.

We all know that films are an important part of Epcot, from documentary-styled movies in World Showcase to background and movies in Future World. Bob Garner, a former Disney Imagineer, and Tim O’Day talk about the film and video elements they helped produce for Epcot.

Looking Back At Tomorrow

Looking back through the Disney archives we will learn about the development of early Epcot attractions, including those that are now extinct and some which never saw the light of day.

The Epcot Center That Never Was

Tony Baxter is a long time Disney Imagineer with credits ranging from Splash Mountain to the Imagination Pavilion – in addition to Epcot. You will get a chance to explore some of the work of Disney Cast Members that never made it to reality.

Disney Imagineers will review some of the unique aspects and details of Epcot that make it a one of a kind.