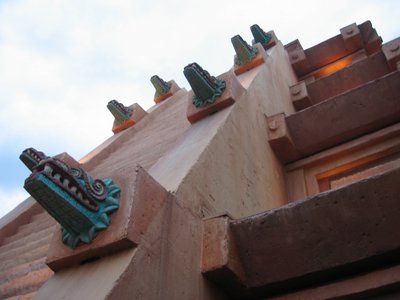 Epcot – Beyond the Attractions

However, Epcot is a special park. It is easy to fill hours, even days, at Epcot without climbing aboard a single ride. There is a tremendous amount to see and do at this park, and much of it requires no FastPass, no long queue, and no ride that spits you out through a gift shop thronged with people. Epcot is a place to hang out and enjoy the sights, sounds, smells, and flavors that truly make this park exceptional.

Wandering in and out of the country pavilions at Epcot’s World Showcase is one way to spend hour upon entertaining hour. Each of the pavilions hosts buildings and exhibits that allow visitors to get a feel for the country’s culture, history, art and people. There are amazing recreations of various countries treasures: China‘s Terracotta Army – the most important archaeological discovery in that country’s history; formidable terrain derivative of the Canadian Rockies; or a towering pre-Colombian Pyramid that covers nearly the entire plaza of Mexico Pavilion.

The pavilions typically include recreations of a few of each country’s most famous architectural achievements. Italy Pavilion includes a replica of the Doge’s Palace in Venice, as well as a scaled-down recreation of St. Mark’s Campanile. Morocco Pavilion sits in the shadow of a replica of the Koutoubia Mosque’s beautiful minaret, or tower. White Heron Castle is the jewel of Japan, taking its inspiration from a 17th century fortress above the city of Himeji. And visitors to France Pavilion will have no trouble identifying a replica of the most recognizable structure in Paris: the Eiffel Tower.

Dining is one of the ways in which Epcot rises above the average theme park. While most parks offer visitors a monotonous selection of hot dogs, hamburgers, and pizza, Epcot has an exciting smorgasbord of dining opportunities that range from quick bites to elegant fine-dining experiences. Much of this variety can be found at the country pavilions of the World Showcase.

Each of the countries includes restaurants that highlight the country’s food and culture. You will find fine dining restaurants and well as unique fast food options, all with an international flair. Bistro de Paris at France is one of the most popular dinner reservation in the park, while other standouts include the exciting Teppan Edo at Japan, and the beautiful twilight setting of Mexico’s San Angel Inn. Unlike Magic Kingdom, which is a dry park, Epcot is also able to serve alcoholic beverages, allowing adult visitors to taste everything from Mexican tequila to German beer. The biggest dilemma of the day just may be choosing which “country” you want to eat in!

Few things are better than a meal for truly absorbing the atmosphere and detail of a location. In their attempts to squeeze the essence of an entire country into a couple of acres, the World Showcase pavilions are overflowing with the feeling and flavor different nations, and incredible detail. It’s worth taking the time to not just pass by the pavilions, but to sit and let them sink in.

As nighttime comes to World Showcase, make plans to stay and watch IllumiNations. This is an amazing spectacle with many different special effects including fireworks, lasers, and water sprays. When evening falls on the counties, Disney pays tribute to world history with beautiful visual displays and magnificent music. Several of the restaurants around World Showcase provide outdoor seating so that you can combine your evening meal with an amazing show.  IllumiNations is appropriate for all ages, unless your children are afraid of fireworks.

Agent P’s World Showcase Adventure is an interactive experience for kids that takes place throughout the World Showcase pavilions. This adventure, inspired by the television show Phineas and Ferb, replaces the old Kim Possible World Showcase adventure, and will debut in the summer of 2012. While adults ooh and ahh over the cultural wonders at each pavilion, kids can be on the lookout for clues to help Agent P defeat the evil Dr. Doofenshmirtz.

The Coral Reef Aquarium at The Seas is a 5.7 million gallon salt water tank teeming with reef-dwelling aquatic species. With a mere 6,000 representatives of over 60 species, the Aquarium is not quite as rich in species diversity as Disney’s Animal Kingdom. Even so, the underwater flora and fauna of the reef makes an impressive visual display and a great place to explore.

Epcot is a terrific park for meeting your favorite Disney characters. The Character Spot near Innoventions West in Future World is the top spot for meeting some of the top stars of Disney World: Mickey and Minnie Mouse, Donald Duck, Pluto, Goofy, and Chip ‘n’ Dale. Characters can be seen here throughout the day, and multiple characters usually appear at once to help visitors maximize their time.

The World Showcase also has its share of character greeting opportunities. Donald Duck in the character of one of the Three Caballeros is a common sight around Mexico. The Akershus Royal Banquet Hall in Norway Pavilion hosts breakfasts, lunches, and dinners in the company of the pantheon of Disney princesses. Mulan and Mushu the dragon from the Disney film Mulan can often be seen around China Pavilion. Snow White and various dwarfs are often available for photos and autographs at Germany – where the Snow White fairy tale originated. Finally, France Pavilion regularly plays host to Belle and the Beast.