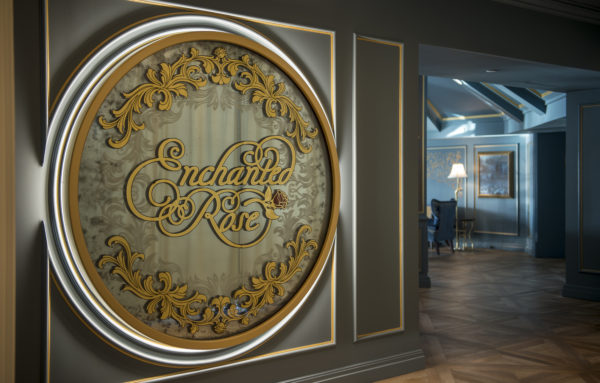 At the new Enchanted Rose lounge, guests can enjoy shareable bites and a variety of beverages including cocktails, martinis, spirits, beer, cider and non-alcohlic options for guests of all ages. The re-imagined lounge is located at Disney’s Grand Floridian Resort & Spa in Lake Buena Vista, Fla., and celebrates the magic and romance of Disney’s popular live-action movie “Beauty and the Beast.” (Kent Phillips, Photographer)

Enchanted Rose is a new bar and lounge at Disney’s Grand Floridian Resort and Spa.

While it is inspired by Disney’s Beauty and the Beast movie, it is more like the 2017 live-action version than the 1991 cartoon version. It is elegant, glamorous, and on par with what you would expect at a Disney Vacation Club Deluxe Villa Resort.

Enchanted Rose opened earlier this month. Enchanted Rose serves up specialty and tableside cocktails and appetizers in four different rooms each with a unique Beauty and the Beast theme.

Let’s take a look at this new bar and lounge!

There are four different rooms, each with a different theme.

The main bar is inspired by Belle’s ball gown with a beautiful gold chandelier. The Garden Room has an enchanted forest theme. It has a rich greenery mural and décor. There’s an outdoor patio inspired by Beast’s Garden Terrace. It looks a little out of place from the inside, but it fits with the exterior of the resort. Belle’s favorite part of Beast’s castle was the library, so the Formal Library setting is a favorite. It has a classic baroque design with French finishes.

Again, despite the movie theme, Enchanted Rose is not cartoonish at all. This isn’t to say that you won’t see some touches of your favorite characters including Mrs. Potts and Lumiere.

The table settings are beautiful with vine detailed on both the silverware and plates. The bars and tables are marble-topped and beautiful as well.

Love is made with grey goose vodka, Pavan Liqueur de France, Pear, Lemon, Twinings of London Chamomile Tea, and agave and served in a red glass topped with rose petals. Envy mixes Busnel Calvados de Pays d’Augue, Green Chartreuse, Green Apple Puree, and Angostura Bitters, and is topped with an apple chip. Both of these drinks are $21, which seems kind of pricy, but you’re also paying for an experience. A Cast member rolls a bar cart up tableside and makes the drink in front of you while explaining how it relates to the story.

Other alcoholic beverages include Lavender Fog, which is made with gin and English breakfast tea and cream, Seasonal Old Fashioned, Rye Not?, Floral Bitter Beauty, Garden Daisy, Sunny Margarita, and Island Rose, which was a little too tropical for the theme, but it was really tasty! These beverages range from $15 to $24.

There are also plenty of non-alcoholic mocktails on the menu.

Crab and ghochetti gratin ($18) is jumbo lump crab with gnochetti sardi, robiola bosina mornay, and citrus breadcrumbs served in a little Le Creuset ramekin. This is a pretty large portion and could be a meal in itself unlike the Esplette Pepper-spiced shrimp ($19), which is pretty small.

The Mini Short-Rib Sliders ($16) topped with bleu cheese and onion marmalade served on split-top buns, could also make a meal especially if they’re paired with the Truffle Fries ($14), which are topped with 18-month aged parmesan cheese and served with garlic aioli. The House-made Flatbread ($18) with charred broccolini, seasonal mushrooms, fennel sausage, ricotta salata, and tomato confit is also hearty and filling enough to serve as a meal.

The Artisanal Cheese Selection ($19) served with pine nut bread and raisins with a jar of pickled accompaniments is also a large portion and is a great option to share before dinner.

Besides the crab and ghochetti gratin, there are two more seafood dishes on the menu including Octopus a la Plancha ($18) with black olives, blistered tomatoes, and fingerling potatoes and the most expensive dish by far, the White Sturgeon Caviar with Egg Timbale, Crème Fraiche, and chives, which is a rather large portion but the $95 price tag is a bit of a shocker.

All of the food for Enchanted Rose comes out of the kitchen of Citricos and is served from 5 pm to 10 pm daily. Enchanted Rose does not accept the Disney Dining Plan or Advanced Dining Reservations.

Will you try the Enchanted Rose at the Grand Floridian?