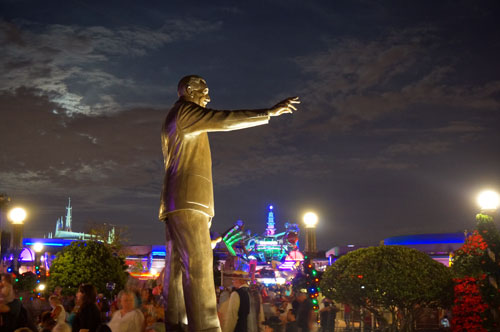 Back in the late 1960s when Walt Disney Productions (the name of the company at the time) was working on their second theme park, the project had many names: Project X, The Florida Project, and Disney World.

After Walt’s death in 1966, it was his devoted brother Roy who saw the project to completion and officially set the name for the Florida property: Walt Disney World. It was a tribute to Walt and his vision.

To this day the sprawling Florida property still pays tribute to Walt and his vision. In fact, you can see tributes to Walt not just in the name of the property but also throughout the property itself.

Let’s take a look at eight places where you can find tributes to Walt Disney while visiting Walt Disney World:

The Villas at Disney’s Wilderness Lodge

The Carolwood Pacific Railroad Room is a hidden gem that many visitors to Disney World never get to see. It’s not located inside a theme park, so it requires a bit more planning and determination to find. This room is located near the lobby area of the Disney Vacation Club location at Disney’s Wilderness Lodge called The Villas at Disney’s Wilderness Lodge. “Lobby” is something of a misleading label since the area doesn’t contain traditional check in facilities, shops, or restaurants; it is mostly just an entrance. The entire area is typically quiet and relaxed and has plenty of comfortable rocking chairs as well as a fireplace.

The Carolwood Pacific Railroad Room contains an actual one-eighth-scale steam railroad train that once belonged to Walt. Walt set up the train in his back yard of his home on Carolwood Drive in the Holmby Hills section of Los Angeles. The train was part of Walt’s inspiration to build Disneyland. You can also find plenty of vintage photographs and interesting plaques with stories about Walt’s long history with trains.

The whole of Main Street USA is something of tribute to Walt since it pays respect to the city where Walt grew up: Marceline, Missouri. Walt’s family lived there from the time he was five years old until he was nine (some reports say from four to eight). It was a short period of time, but Marceline had a big impact on Walt. It is where Walt saw his first circus, attended his first school, and saw his first film. Walt regarded the city as his hometown.

However, you can still find a very direct tribute to Walt himself on Main Street. Above the Plaza Restaurant, which faces Cinderella Castle, you will see a window with a tribute: Walter E. Disney – Graduate School of Design & Master Planning.

Created in 1955 by Disney Legend and sculptor Blaine Gibson, the Partner’s Statue shows Walt holding Mickey Mouse’s hand and pointing. Many people have speculated about what Walt is pointing to, but historian Jim Korkis reports that Blain Gibson said the pointing was meant to suggest the idea of ‘Look what we’ve accomplished together’.

There aren’t many add-ons at Disney World where I think to myself, ‘wow that is a pretty good deal.’ However, I may have just found one. The Marceline to Magic Kingdom Tour is a three hour walking tour that reviews how key events in Walt’s life inspired the Magic Kingdom. The tour starts before the Magic Kingdom opens, which gives you a chance to take some great photographs without the usual crowds. The cost? Just $30 (as of early 2014), which seems like a great value to me for a guided tour.

5 – Magic Behind the Steam Trains Tour

As mentioned earlier, Walt had a long history with trains. He had a summer job selling newspapers and candy on a train and eventually set up his own model train in the back yard of his family home. The three hour Magic Behind the Steam Trains Tour gives you access to backstage areas in the Magic Kingdom where Disney services its trains, as well as a chance to see a Locomotive Engineer prepares the trains that circle the Magic Kingdom for the day. The cost (as of early 2014) of this tour is $54.

The Academy of Television Arts and Sciences Hall of Fame Plaza is located in a quiet area of the Echo Lake section of the park not far from the huge Mickey Sorcerer hat. Here you will find bronze busts of many television celebrities including Lucille Ball, Bill Cosby, and Oprah Winfrey. You can also find a bust of Walt.

The Backlot Tour attraction at Disney’s Hollywood Studios swings by the airplane that Walt personally used. The plane was called “The Mouse” and carried Walt and other Disney Cast Members from California to work on projects such as the 1964 World’s Fair as well as Disney World. While the plane is likely no longer operable, it is an amazing piece of Disney history.

Perhaps the ultimate tribute to Walt in any Disney theme park is One Man’s Dream. Sadly, many people scurry past this attraction on their way to Toy Story Mania. They are missing out. One Man’s Dream includes amazing exhibits from Walt’s life, including Walt’s actual office from the Disney Studios in California, preserved to be just as he left it when passed away. You can also see “Granny Kincaid’s Cabin,” which is a model that Walt personally built. After you soak in the history and the one-of-a-kind artifacts, you are treated to a 15 minute film with rare and vintage footage of Walt’s life. The movie is narrated using audio of Walt himself with additional commentary by Julie Andrews. It’s a balanced and inspiring tribute to the good times and bad times that Walt experienced. It’s also a must-see attraction for anyone who has an interest in learning more about Walt Disney, the man behind the vision.

Do you like seeing tributes to Walt – the man – around Disney World?
Leave your comments below.