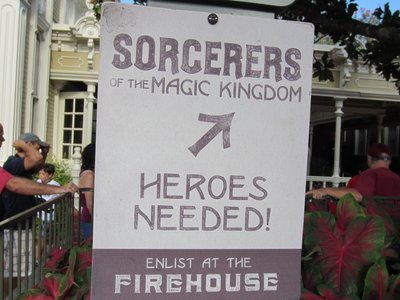 For some time, a Disney has been installing the equipment needed to support the game.  This includes converting the Firehouse on Main Street USA into the place where you sign up for the game.  They have also installed a number of screens throughout the park where the game plays out.

Ricky Brigante, a writer for the Inside The Magic web site, has written one of the first pages of information I have seen showing the actual demonstration of the game – or at least to some components of the game.

Ricky is very upfront and points out clearly that the game is not 100% finished.  However, he was one of the first people to participate in a play test at the Magic Kingdom.  This was an opportunity to see some elements of the game in action.

The Story Behind The Game

The idea of the big game is that Disney’s Magic Kingdom is under attack by classic of villains from Disney’s movies.  It is your job to save the Magic Kingdom by countering their powers.  You cast magic spells in an attempt to save the day.

When you show up at the old Fire Station location on Main Street USA, you receive a series of paper cards.  Actually, the cards are more than just paper.  The card that identifies you as a unique player in the game actually includes a radio frequency chip that allows the game to track your movement between the various stations.

To play the game, you first walk up to a “magic portal” and hold up the card that identifies you as a player.  You watch an animated sequence on the screen where the villain talks to you about their evil plans.  Then it’s your turn to “cast a spell” by holding up a spell card.  The villain and then reacts to the spell that you have cast.

Check Out The Video

Ricky has created an extensive series of YouTube videos showing how the game is played.  Check out this first video to see a number of the magic portals throughout Adventureland.  You can also see Ricky play the game by walking from portal to portal, holding up his cards, and interacting with the screens.

As mentioned above, Ricky points out that he was involved in a play test.  The game is not finished, and probably didn’t even include all of the features the actual game well.  Given all that, many of the concerns and issues he mentioned and I will review will very likely be fixed.  However, here are some early thoughts.

First, it was difficult to see some of the screens in a bright Florida sunlight.  It seems that most – maybe all – of the portals are made up of large television screens that display the animated villian characters.  The Florida sun can be intensely bright, creating reflections and making it difficult to see the screen.  It seems like this should be something that Disney Imagineers can address quite simply.

Next, there were a few minor issues with crowds flow.  It seems the game is set up so that you need to stand a few feet from the screen in the portal.  There are some areas in the park where traffic flows by, and it is hard for people to know if they should sneak in front of you or simply walk behind you.  Also, there were a few places where people started to queue up.  These also seem like issues the Disney Imagineers can fix up.

Finally, and perhaps most importantly, was Ricky’s comment about whether or not the game was actually fun to play.  He asked a very telling question –what’s the point behind the game?  There didn’t seem to be much skill involved, and in the end the game seemed to be little more than holding up cards in front of screens to watch short animated sequences.

After watching the YouTube video, I had to agree with this assessment.  It was hard to see exactly how the portion of the game that is currently deployed that would be fun.  Perhaps children would enjoy the simple pleasure of watching the videos, but older kids and adults might find the current format less then exciting.  However, this is where it is critically important to remember Ricky’s comment that this was a very early play test, and that the full game was probably not yet deployed.

I think it is important to hold judgment on the success of the game until it is officially is rolled out.  This concept of testing in adjusting is very common at Disney World.  The opening of any new attraction means the Imagineers will need time to test and adjust.  This is especially true of an innovative, interactive game like Sorcerer’s Of The Magic Kingdom.  And, if we look at history, its not very often that Disney comes up with a clunker.

I am very much looking forward to seeing more information about this game as it evolves and as we see it coming into its final state.