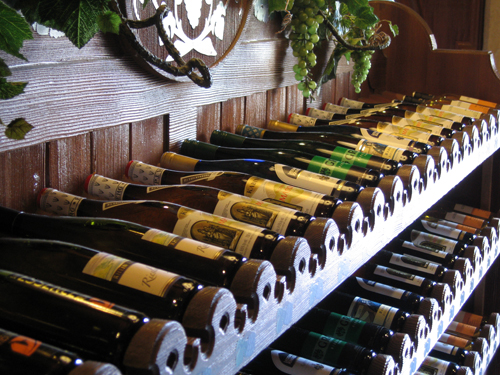 Attention Adults: Drinking Around the World at Epcot

I’m not an advocate of getting sloshed at Disney World, but taking your time to enjoy some adult beverages can be fun.

There are many ways to drink around the world, but we’ll start by going to the left and making out way around the lagoon. Another great option is to turn right and go backwards.

Before we get started, let’s set some ground rules.

The first stop on our journey will be in Mexico. There are several options here including Dos Equis beer, margaritas, and tequila. San Angel quick service location has frozen margaritas, which are great for beating the heat and starting your DATW journey slowly. La Cava del Tequila also has margaritas, and you can choose whether you want it on the rocks or frozen. You can also get tequila, and don’t miss starting off with the guacamole and chips at this location inside the pavilion.

Although not as impressive as Mexico, Norway serves up an alcoholic Viking Coffee inside the Kringla Bakery. It’s not ideal for the summer heat, but if you need to start your morning with coffee, why not put a little kick in it? An outdoor cart also has Danish Carlsburg beer, wine that is unfortunately not authentically Norwegian, and Scandanavian liquor called Aquavit Glacier, which is served by the shot. They say if you don’t grimace within five seconds, you’re a true Viking.

The most accessible option in China is the Joy of Tea. This quick-service location serves specialty cocktails plus peach snap and Canto Loopy, which are basically pre-mixed juices with a shot added by a Cast Member. This location will also occasionally have seasonal drinks. If they do, give one a try!

Since it is not technically a country pavilion, this stop will add a twelfth drink to your menu, but the Smoothie with Starr African Rum is worth the stop. If beer is your thing, you’ll find a handful of draft beer offerings, but none of them are authentically African.

Germany is almost synonymous with beer, so it’s no surprise that there are many options here. The Somerfest Imbib cart has a good variety of German beers to choose from plus Jagermeister and some other shots. The Wine Cellar shop sells German Wines by the glass (my favorite is the Riesling) and a wine flight. Be careful though. This still only counts as one stop!

The Tutto Gusto Wine Cellar in the Italy pavilion is a nice quite place to cool off and take a break from your journey. After all, you’re about halfway around the world at this point. Here you’ll find a great selection of Italian wines and beers including a flight.

While you’re at it, this is a great time to grab some substantial food at Tutto Italia restaurant.

If you’d prefer a more casual atmosphere, grab a glass of wine at the Enoteca Castilla cart.

Until recently, the only beer available at the American Pavilion was the standard Sam Adams and a few other standard beers. Now, you can treat yourself to a craft beer at Block & Hans. There are many American breweries featured, and you can even get some jalapeño and cheese stuffed pretzels. Sip on Oberon Ale, Victory’s Golden Monkey, or Napa’s Hopageddon Imperial IPA to name just a few.

If you like Sake, there is a great little Sake Bar inside the shop at the back of the pavilion. If this isn’t your thing, check out either the quick-service location or the cart both near the front of the pavilion. Both locations offer a variety of authentic Japanese drinks including an ice cold Kirin served with frozen “beer foam” on top. You’ll have to sip this one from a straw!

This country was also lacking beverages of the adult variety until recently. However, head to the walk-up bar at the Spice Round Table and grab a specialty cocktail or, better yet, a sangria. It’s less sweet than the cocktails, and have more of a juice flavor.

It might seem like the obvious choice to get a French wine, but I can assure you that there are plenty of other amazing choices.  Instead, opt for either the Grey Goose Citron Slush or the Grand Marnier Orange Slush. These ice cold, refreshing beverages are France’s gift to hot guests. If you’re up for a double, it will be served in a colored souvenir glass with an extra shot on top.

I know, you think I’m drunk because I’ve switched Canada and the UK, but there’s good reason for this! Although Canada has some great beers in the country itself, those represented at the World Showcase are less than impressive, so we’ll switch the two countries to end on a high note!

Canada really only has one option: a cart serving up Moosehead and Moosehead light. The cart will occasionally have a seasonal keg, but it’s not usually much better. As a redeeming quality, Le Cellier has a wonderful key lime pie martini if you can get a reservation.

You could visit the cart or the Yorkshire Fish and Chips, which has a limited selection, but the only place on our tour that can compete with Mexico is the UK’s Rose & Crown Pub. Here you’ll find authentic British beer as well as a full bar and mixed pints, or beer and cider mixes.

Once you grab your drink, head back to the gardens behind the shops or try to find a spot to watch IllumiNations.

Have you ever conquered the challenge of Drinking Around the World at Epcot?