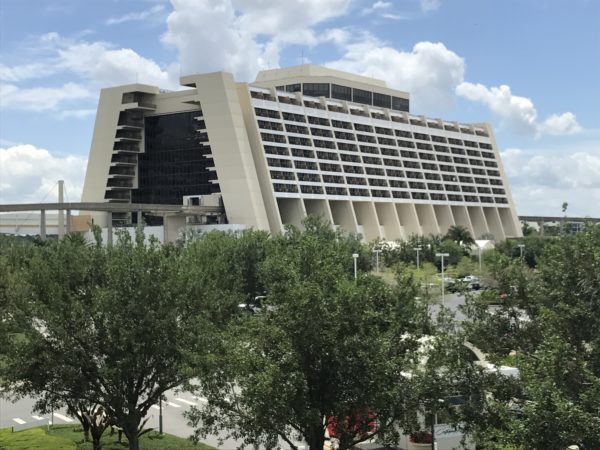 The Doctor Is In: The Contemporary Resort Hotel – 1974 vs. Today

An interesting find among some old files was an invoice from Disney’s Contemporary Resort hotel dated January 1974. My thoughts began to compare the 1974 experience to those of my stay at the resort last month.

The 14-story, 184-foot high A-frame was built in 1971. The building project was named the Tempo Bay Resort Hotel. Roy Disney was overseeing the project and referred to it as the “contemporary hotel”. When completed, Roy’s label became the name, the Contemporary Resort Hotel.

A unique building technique placed a crane on either side of the A-frame. The rooms were constructed a few miles from the site, transported to the site and the cranes would slot the completed rooms into place. Roy wanted a monorail to go through the center of the hotel but the architects said this would not be structurally safe. Roy asked them to rethink it. The monorail was placed to one side on the fifth floor and securely anchored to the ground. The north and south guest wings were added as part of the Contemporary complex. Near the north wing was the Racquet Club with tennis courts. The north wing and the Racquet Club were replaced in 2009 by the Disney Vacation Club Bay Lake Tower. A major addition to the resort in 1991 was the 115,000 square-foot convention center.

The Pueblo Room was a sit-down, fourth-floor concourse restaurant. Our family meal for 2 adults and 2 children in 1974 was $28. That restaurant has been replaced by Chef Mickey’s, a character attraction buffet. Today, dinner for the same family costs $176.

On the 1974 visit, our children enjoyed the Fiesta Fun Center on the first floor near the lobby where The Wave … Of American Flavors is now located. The arcade is now on the fourth floor.

Other fourth-floor concourse changes include the Contemporary Woman and Contemporary Man shops now in the Bay View Gifts. The arcade occupies the Fantasia shop area now moved to the center of the concourse.

On the top floor was the scenic dinner theater, Top of the World, now called the California Grill restaurant.

Unchanged from 1974 is the wow effect when you enter the fourth-floor concourse and observe the stunningly creative mural by Mary Blair. In the center of the concourse extending up 90 feet on six walls are 18,000 hand-painted tiles. The mural remains a spectacular work of art even after 48 years.

On my recent stay, my accommodation showed a Bay Lake view. I recalled Discovery Island, visible from the Contemporary. Walt took notice of this 11.5-acre island when he was assessing possible properties in Florida for his special project in 1965. This island was privately owned and known as Riles Island. After Walt purchased the entire property for his Walt Disney World, he called it Treasure Island, and it was later renamed Discovery Island. In 1974, guests could visit the island by boat. There was a $10.60 adult charge and $5.83 for children. This island was stocked with many animals and especially exotic birds. It was a special outdoor adventure. With the opening of Disney’s Animal Kingdom and a new Discovery Island, many of the animals were transferred. The original island was closed to guests in 1999. It remains abandoned with no immediate plans for renovation.

As you approach Magic Kingdom by ferry or monorail from the parking lot or bus, you are treated to the unique sight of the beauty of the Contemporary Resort Hotel. The 14 story A-frame reveals a preview of the magic place you have entered.

Can you believe the Contemporary Resort cost $46 a night in 1974?