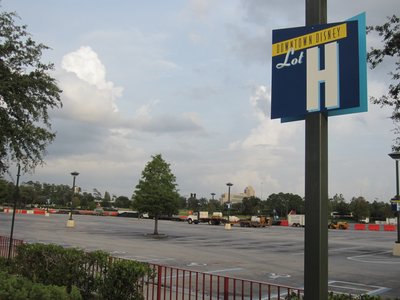 In the spring (appropriately) of 2013, The Disney Company announced that they would be undertaking a massive remodeling of Disney Springs into an expanded dining, shopping, and entertainment complex that will be called Disney Springs. We can’t wait to see what everything will look like when it is done in 2016.

When everything is eventually done, there will be two new parking garages that can hold a total of 6,000 cars. This will be a very welcome addition, as anyone knows who has trolled for an open space in the often-full lots of Disney Springs.

In a way it seems odd that Disney has to build parking garages in Central Florida when they have so much undeveloped land, but then again the Disney Springs complex has grown and shifted since it originally opened in 1975 as the Lake Buena Vista Shopping Village.  Disney can be proud that Disney Springs has been so successful, and perhaps just a tiny bit embarrassed that the planners back in the early 1970s didn’t have the foresight like they did in the other areas of the property to plan for growth. Then again, planning for changes over a 40 year time horizon is a hard job.

Anyway, until those new garages are open and all the construction is complete, expect parking headaches if you are driving into Disney Springs.

Here are five tips on how to deal with renewed parking problems at Disney Springs until the construction is finished.

You will have a much easier time of finding parking earlier in the day. Instead of planning a shopping or dining expedition in the evening, consider going in the morning. Not only will you spend less time hunting for parking, but you might save some money. Taking in a movie at the AMC theater or a round of bowling at Splitsville is cheaper earlier in the day. The Characters In Flight balloon ride takes off more reliably in the earlier hours of the day before the winds pick up, and DisneyQuest often has smaller crowds in earlier in the day.

Many people in cars understandably want to park near the Marketplace section of Disney Springs, which includes popular stops like the humongous World Of Disney store and Ghirardelli ice cream. However, if you park near the West Side, where Cirque du Soleil is located, you have a better chance of finding a spot. There is a marina on both the west end of Disney Springs near the House Of Blues and on the east end near the Rainforest Café. You can get a free boat ride from one side to other, which is both fun and relaxing.

Disney is opening up parking spots across Buena Vista Drive from Disney Springs in the area in front of the Team Disney building. These lots are a bit of a hike, and are normally reserved for Disney Cast Members only. However, you might be able to take one of the buses that Disney is planning to shuttle guests from these lots to Disney Springs.

A boat runs from several Disney resort hotels to Disney Springs: Old Key West, Saratoga Springs, and Port Orleans French Quarter and Port Orleans Riverside. If you are staying at one of these resorts or are planning to visit one of them, consider taking the free boat to Disney Springs. Keep in mind that this will add travel time, and ask about departure times and plan your schedule accordingly. But this is also a fun and relaxing way to travel.

5 – Remember There Is Traffic Everywhere

As much as Disney Springs will have traffic hassles during this period of construction, remember that most every other alternative around Orlando has its own traffic headaches too. Whether you are considering heading to Orlando’s Mall At Millennia or one of the many outlet malls, they have traffic issues as well.

So overall be calm, add a bit of extra time, and enjoy the views as you crawl along.

What do you think about the parking situation at Disney Springs?